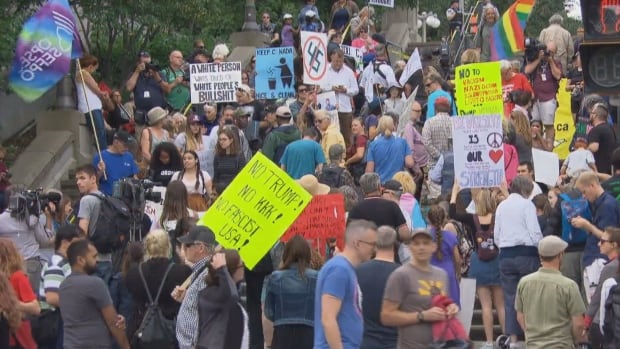 An anti-racism protest is underway at the U.S. Embassy in Ottawa. (David Richard/Radio-Canada)

An anti-racism protest drew at least 700 people to the U.S. Embassy in downtown Ottawa as Canadians looked to broadcast their message of peace and inclusion to their neighbours to the south, and their resolve to guard against bigotry here.

The event, which began at noon Wednesday on the steps outside the embassy off Sussex Drive, was organized in response to an attack in Virginia earlier this month that left a 32-year-old woman dead.

“We stand in solidarity with the people who were harmed by neo-Nazis in Charlottesville, Virgina, and with all racialized peoples who are targeted by discrimination and systemic oppression,” organizers wrote on the Ottawa event’s Facebook page.

“This protest is committed in principal to inclusiveness, racial equity, tolerance, visibility and intersectionality.”

Chants of “no hate, no fear” echoed through the streets around the embassy.

Rev. Sam McDargh, originally from Kansas but now a permanent resident of Canada, said she flew the American flag upside down to express her sorrow.

“My country is in distress,” she said. “At the end of the day, no matter what religion, we’re all talking about the same thing: the golden rule.” 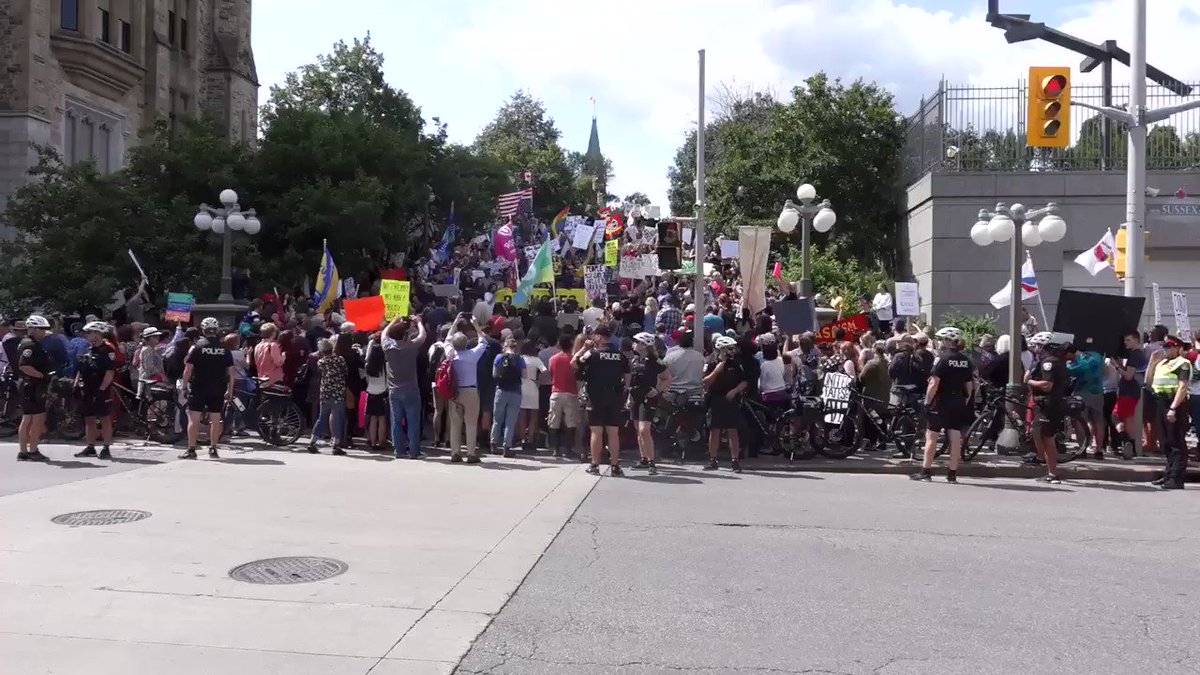 Rescheduled due to storm

The protest was originally scheduled to happen Tuesday, but was postponed because of powerful storms that passed through the Ottawa area.

“A hundred people showed up even thought there was a tornado warning,” said Adi Rao, one of the organizers. “This is sort of a breaking point. Now is the time we need to stand up.”

RCMP and Ottawa police were present, with some officers on bicycles, others on foot, and some nearby in police vehicles.

Four counter-protesters showed up to disrupt the rally, but they missed the crowd by about an hour. 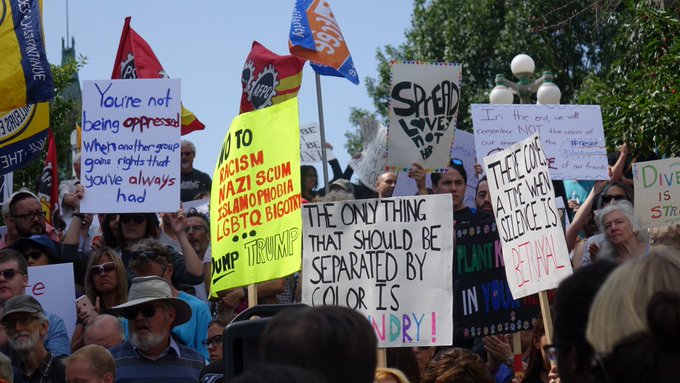 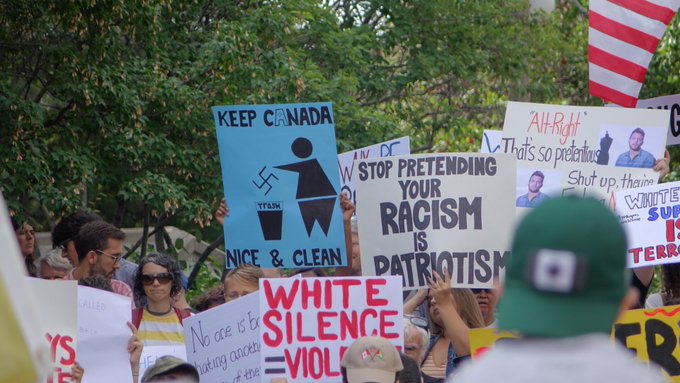 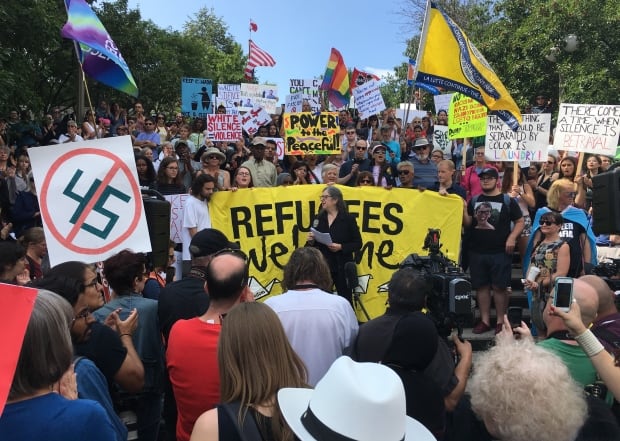 About 700 people were estimated to have shown up by about 12:45 p.m. (Jonathan Dupaul/Radio-Canada) 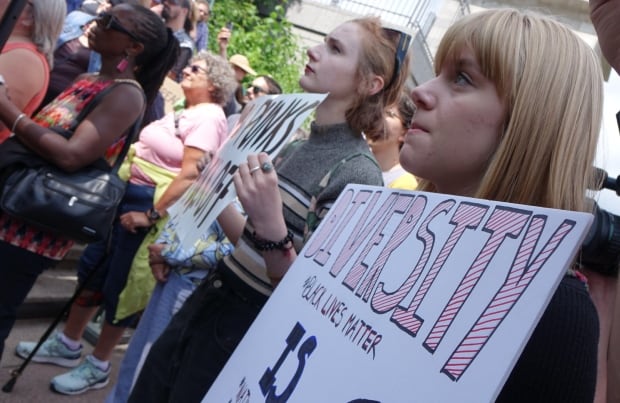 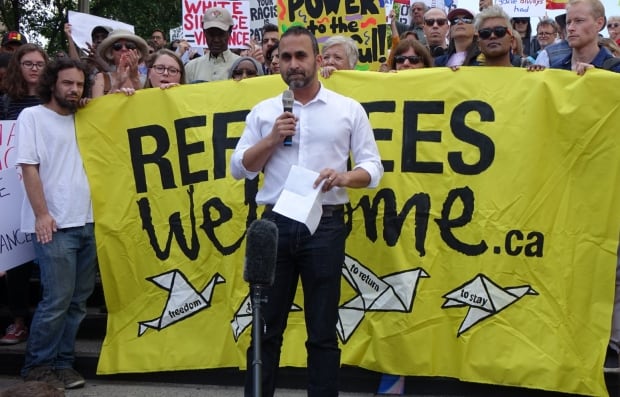 A speaker addresses the crowd on the steps outside the U.S. Embassy. (Jonathan Dupaul/Radio-Canada) 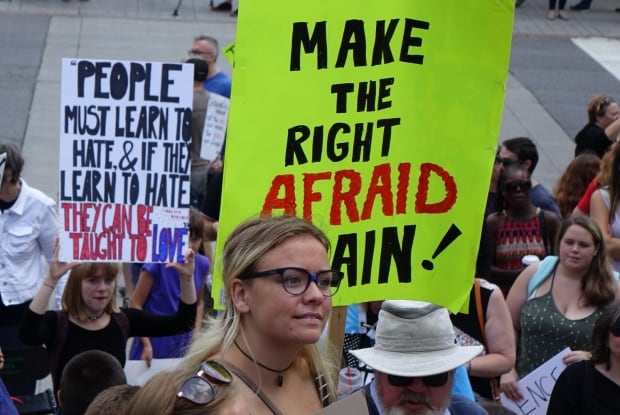 ‘Make the right afraid again,’ reads one of the signs. (Jonathan Dupaul/Radio-Canada)