by Ashifa Kassam in Toronto

Canada is hailed for its tolerance but is it ready to confront its racism?
Critics say common narrative obscures realities of how race relations really play out in country as a fledgling conversation is finally under way 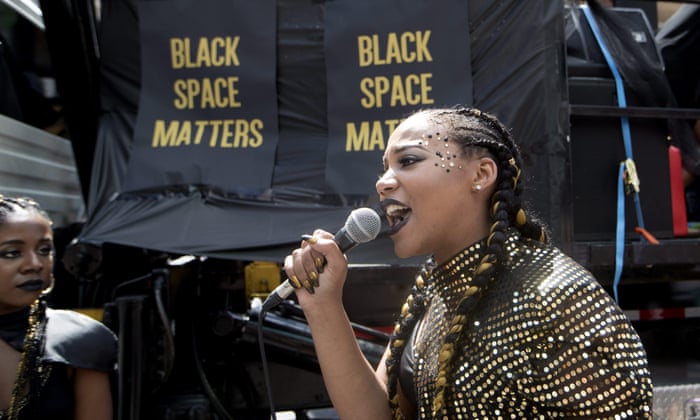 A member of the Black Lives Matters movement speaks to members as they stage a sit-in at the annual Pride parade in Toronto. Photograph: Mark Blinch/AP

They sat calmly on the hot pavement; their black and gold outfits a jarring contrast to the sea of rainbow flags and banners surrounding them. Minutes earlier the parade – the crown jewel of Toronto’s month-long Pride celebrations – had been in full swing, its floats heaving through the city’s main arteries alongside thousands of revellers.
Canada’s indigenous people raise voices as youth activism surges
Read more
Now it had come to a standstill. “We refuse to move,” said a member of Black Lives Matter Toronto, her voice crackling as it came through the megaphone. “We are calling you out.”

The group had joined the parade as an honoured group. Now it was staging a sit-in as a dozen or so protesters argued that Pride in the city had become the antithesis of the principles of inclusion – a space for white, gay males.

Black Lives Matter Toronto brandished a list of demands, ranging from increased funding and support for black and South Asian groups at Pride to the removal of police floats and booths from future events.

The sit-in dragged on for nearly 30 minutes before Pride organisers stepped forward to sign the list of demands and the parade moved on.

Last week’s blockade of Pride was the most high-profile – and most contentious – protest so far by the Toronto chapter of Black Lives Matter. It prompted a vociferous debate in Canada’s media, but while much of the discussion has focused on the sit-in, others have stepped back to point out what they say is a remarkable shift; after years of Canadians shying away from the topics of race and racism, a fledgling conversation is finally under way.

Canada is celebrated around the world for its diversity, tolerance and multiculturalism, often held up in contrast to the UK’s recent Brexit vote and the rise of Donald Trump as a political candidate south of the border. For many this narrative has obscured the realities of how multiculturalism in Canada plays out on the ground.

Statistics paint a far bleaker picture: between 2005 and 2015, the number of black inmates in federal prisons in Canada jumped by 69%. In Toronto, 41% of children and youth in the care of child welfare services are black, despite making up just 8% of the youth population in the city.

Suicide rates for young indigenous males are 10 times higher than those of non-indigenous youth, while for young females the number climbs to a staggering 21 times higher.

People in Canada generally will do anything to avoid talking about race
Desmond Cole, journalist
Last week Muslims across the country denounced an increase in hate crimes directed at them, with the number of reported incidences doubling between 2012 and 2014. In Vancouver and Toronto, more than half of those living in poverty belong to racial minorities.

“People in Canada generally will do anything to avoid talking about race,” said Desmond Cole, a journalist who has long chronicled race issues in Canada, including his personal experience as a black man who has been subject to random police checks more than 50 times.

Despite this, glimpses of the cracks in the system have at times been laid bare for the world to see. Many First Nations communities continue to struggle with what their leaders call “third world living conditions”, from a lack of clean water to overcrowded houses riddled with mould.

Toronto – known globally as one of the world’s most diverse cities – also elected the late Rob Ford as city mayor, despite his vitriolic outbursts towards Jews, black people and the LGBT community.
Welcome to the new Toronto: the most fascinatingly boring city in the world
Read more
“How is it that a person like Rob Ford could preside over a presumably multicultural city like this and be celebrated even as he attacked minority groups?” Cole asked. “That’s your multiculturalism.”

The mere existence of a Toronto chapter of Black Lives Matter suggests all is not well in Canada’s approach to race, said Janaya Khan, one of the group’s founders. Efforts are also currently under way to start chapters in Vancouver and Montreal.

In recent days the group has been bombarded with hate mail and death threats over their actions during Pride. They have also received messages of support for their strong stance on police floats and booths.

The Toronto chapter was launched in 2014, and the founders initially came together as a reaction to events south of the border, including the death of Michael Brown, the black teenager fatally shot by police in Ferguson, Missouri.

But events closer to home – such as the death of Jermaine Carby, a 33-year-old shot dead after being pulled over by police in a municipality near Toronto – convinced the group to formalise their presence in Canada, seeking to spark a similar conversation on race, privilege and power north of the border.

The group has since taken on carding – random police checks that disproportionately target black people – and challenged Toronto police over the death of Andrew Loku, a mentally ill 45-year-old man shot last year by police at a subsidised housing complex after he refused to drop the hammer he was holding.

Their efforts have helped yield promises of a public consultation from Ontario’s premier, a city council vote to review the police investigation unit through a lens of anti-black racism and a coroner’s inquest into the death of Loku.

But the persistent idea of Canada as a colourblind country means the group must often start by countering this idea.

“We often end up finding ourselves having to disprove before we can prove,” she said. Little data exists on racialised groups – as minorities are at times referred to in Canada – and the small number of black people in the country means the movement must seek out allies. “One of our most powerful mantras is Black Lives Matter on Indigenous Land.” 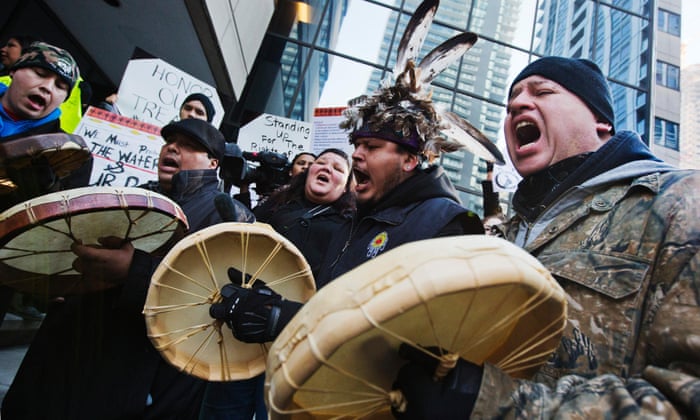 First Nations protesters sing as they take part in a ‘Idle No More’ demonstration in Toronto. Photograph: Reuters
It’s a nod to another group whose frontline activism has helped pry open a space for discussion on race in Canada. Idle No More, the indigenous-focused protest movement, was born out of a frustration with the public’s lack of interest in the many reports, commissions and court cases highlighting the devastating effects of racism on indigenous peoples.
“Idle No More said, if people aren’t going to listen, we’re going to show you,” said Pamela Palmater, a member of the group and head of the Centre for Indigenous Governance at Toronto’s Ryerson University.

“We don’t want to live this way any more. People are dying, we have murdered and missing indigenous women, our kids are in foster care, we’re overrepresented in prison. Racism impacts us in a very direct way.”

Some four years after the movement launched, the conversation remains confined to mostly indigenous people, racialised minorities and a few key allies, she said. “I don’t think that Canadians are actually fully engaged in a conversation about racism.”

The push to take this conversation from the margins to the mainstream is set to be bolstered by the Ontario government in the coming weeks. On Thursday, the province will hold the first of a series of public meetings aimed at tackling systemic racism.

“And I think it’s our job to ensure that if there are barriers that are identified, that we as a government look for ways to remove those barriers.”

These sorts of conversations around race and racism would only strengthen Canada’s place as a global example of multiculturalism, he argued. “If you look around, there’s a lot we need to be proud of. We’ve got diversity, we’ve got multiculturalism. People come to our country and especially our province to say, how are you guys making this work, because it does work in many ways,” he said. “But we know we can make it better.”