More than half of black residents in GTA have been stopped by police in public, new report says 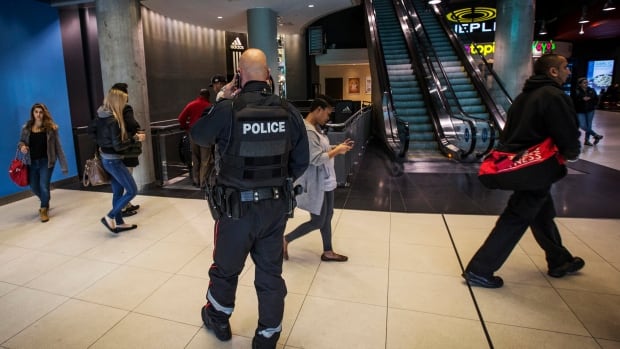 A new report surveying more than 1,500 people who self-identify as black in the GTA found that regardless of socioeconomic status, all black people were just as likely to be arbitrarily stopped in public by the police. (Mark Blinch/Reuters)

A new report is shedding light on the types of interactions members of the black community in the GTA have with police officers.

One of the themes in “The Black Experience Project” explores relations with police services, highlighting both negative and positive interactions with officers.

More than 50 per cent of those surveyed said they have been stopped by police in public places and that number jumps to nearly 80 per cent among males between the ages of 25 and 44.

The findings come only a day after a Toronto police officer was charged after a 19-year-old black man was beaten and blinded in one eye.

After more than seven years of research, interviews, and community engagement, “The Black Experience Project” study released its findings, aiming to answer the central question: “what does it mean to be black in the GTA?”

According to the report, the GTA is home to more than 400,000 people who self-identify as black, nearly half of Canada’s total black population — which has more than tripled in the last 30 years. 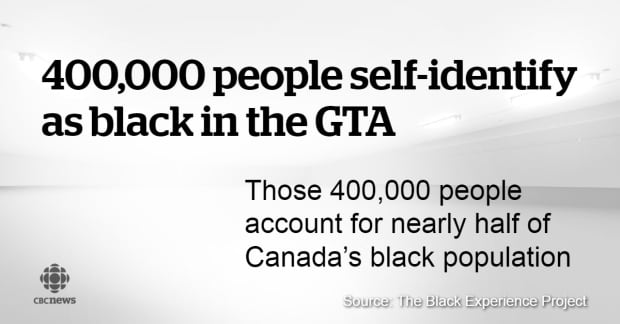 Launched in 2010, the study, led by Environics in partnership with various community groups, including the United Way and YMCA, interviewed more than 1,500 participants who self-identified as black. They were asked questions about identity, racism in school and workplaces, community engagement, friendships and police interactions.

The goal of the project is to help the broader community understand and appreciate the diversity and vibrancy of the black community.

“There’s a lot of qualitative and rich data, close to about 60,000 discrete comments that we can continue to dive into and analyze and feed into the many initiatives that are happening in the black community,” said Fowzia Duale Virtue, one of the participants in the project, and now a coordinator for the Black Experience Project. 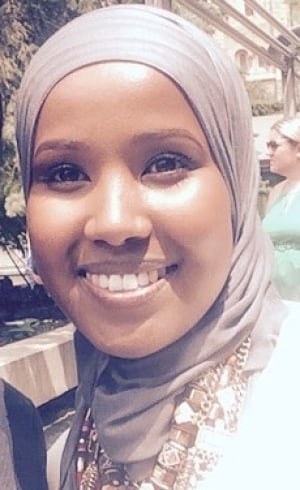 As a young Somali woman who identifies as black, she hopes the project will also be a “historical window of what black people were saying, feeling and doing between 2010 and 2017.”

“Looking back at that in 30 years from now will be incredible and I think it will lend to having that historical, archival moment captured in an authentic way,” she added.

The individuals who participated represent a wide range of ages and socioeconomic status.

When it came to police relations, black men between the ages of 25 to 44 reported the most amount of negative interactions, in comparison with the wider group.

“This is something that has been well documented, it has been a reality that the community has known,” said Virtue. “We know that relationships with the police have been with a lot of tension, a lot of conflict, a lot of mistrust … and certainly the numbers are showing that.” 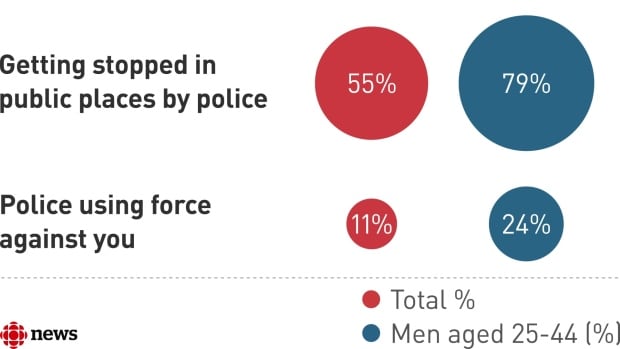 Thirty-eight per cent of those surveyed said they were harassed or treated rudely by police, but that number jumped to 60 per cent in the 25 to 44 age range for males.

Eleven per cent had police use force against them, compared to 24 per cent of men aged 25 to 44.

In contrast, 44 per cent said they had been helped by the police, but that number dropped to 39 per cent for the same group of males. All blacks were just as likely to be arbitrarily stopped in public by the police.

Virtue recalls her own recent experience with police, during Project Traveller — a series of raids in 2013 that targeted the Dixon neighbourhood in Etobicoke, where Virtue grew up.

“We heard from grandmothers that they had guns pointed to their head,” she said, describing a town hall she attended in the community. She added that there was panic and constant vigilance around the neighbourhood in the days after.

‘We heard from grandmothers that they had guns pointed to their head.’– Fowzia Duale Virtue

She calls the interactions between police and the black community an “ongoing conversation” that has to be a “constant negotiation around humanity, being civil with people, and not assuming that they are the inserted villain.”

The Black Experience Project data “reaffirms what the community has long been saying on many different platforms; this has been a long stated issue,” she added.

Local police forces also received a failing grade when participants were asked to evaluate the job they were doing in “treating black people fairly” — 54 per cent reported they were doing a poor job. 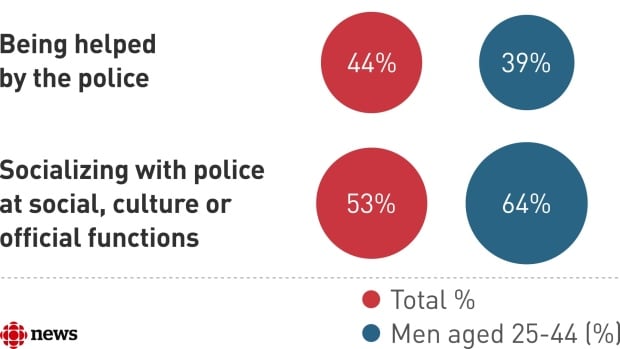 However, four-fifths of respondents said officers were doing a good or average job when it came to the broader goal of ensuring the safety of citizens.

The research also found that two thirds of the black people surveyed frequently or occasionally experienced racism and discrimination, and most shared the conviction that black people in the GTA are treated unfairly because of their race.

Eight in 10 said they experienced day-to-day micro-aggressions, like being treated in a condescending or superficial way.

In looking at community engagement, researchers found that Black Experience Project participants were more active and engaged in their communities than Canadians in general, with high rates of volunteering and membership in clubs and organizations.

Difficulties also extended to the education system, with half of students saying they had challenges non-black students didn’t face. Forty per cent of respondents also said they felt accepted by their teacher “only sometimes” or “never.”