So are they African or are they French? Let’s get this nonsense over with. It’s a stupid debate, corroded with bad faith and shallow thinking.

Instead of the takes and the angry tweets about the Actual Identity of France’s World Cup-winning football team, you might watch Les Bleus 2018: L’épopée russe, the two-hour behind-the-scenes documentary that aired this week on French channel TF1. (It’s not yet licensed for global streaming, but it’s floating around online).

You’ll see the players on the team bus grooving to the selections of defender Presnel Kimpembe, the unofficial team DJ with the ubiquitous Bluetooth speaker. There’s Haitian kompa, Caribbean zouk, the evergreen dancefloor hit “Premier Gaou” by Ivorian band, Magic System, and some raunchy and very catchy tracks from Naza, a Congolese-French singer who blends hip-hop with Central African guitar grooves. The white players on the team sing along. At another point, winger Ousmane Dembélé is crooning to “Une belle histoire,” a totemic pop ballad from the early 1970s by Michel Fugain.

On the bus, Adil Rami play-interviews fellow defender Benjamin Pavard, a curly-haired white kid from northern France who has scored a wonder goal in the France-Argentina match, bursting out of nowhere with a perfect long-range volley. After scoring, Pavard had run off the field to cheer with Rami, his good pal. “I didn’t know what to do because I’m not used to scoring goals,” Pavard says in French, then unfurls Algerian slang for “chief” or “boss” as he points to Rami. “So I went to see the khouya!”

A locker-room scene after that Argentina match—a 4-3 thriller that released the French team’s confidence and put them on a roll to the championship—shows midfielder Paul Pogba, who emerges in the film as the team’s charismatic leader, chanting himself into a near-trance as he and defender Samuel Umtiti beat out a rhythm on some kind of case or table. 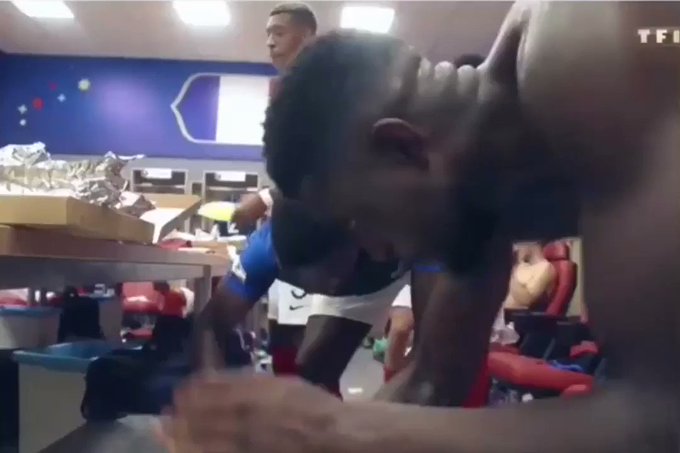 One by one Pogba shouts out his teammates’ names, coining nicknames as he goes. When he gets to Pavard, he repeats the defender’s name three times then starts telling the tale of the goal, still to the beat. By this point Kimpembe is hovering behind Pogba and Umtiti, pouring water from a bottle onto their heads and backs.

Drums, praise, libation—call it a griot moment, or atalaku, the Congolese practice of shouting out patrons and friends in the club—you get the idea. It’s completely African. It’s also completely multiracial, like the team. And, because this is after all France’s national soccer team, it is ipso facto completely French.

So why is everyone debating?

Yes, Trevor Noah, echoing plenty of Black and brown people who enjoyed the France team for its plural origins, quipped that “Africa won the World Cup.” The routine was basic—Noah isn’t really original or all that funny—but the sentiment was affectionate. But France’s ambassador to the United States, Gérard Araud, took offense, equating Noah, a Black African expressing a cultural affinity, with the far-right racists who in the past have criticized the team as too Black to represent France.

The usual avalanche followed, trotting out the usual recriminations, and culminating as always with explainers about how France views race differently from the “Anglo-Saxon” world. Delve into those if you wish, just bear in mind that any generalization about how a whole countrythinks is inherently fallacious, and serves a power structure. (Better to read the views of actual Black French analysts like the writer and activist Rokhaya Diallo.)

As for the players, they’ve said a few things: defender Benjamin Mendy, for instance, tweeted a “fix” to a list team members with the flags of their families’ country of origin, replacing all of these with the French flag. Rami, meanwhile, has spoken about how he feels both French and Moroccan, at the same time. All know that identity is politicized—non-white French footballers always seem to get claimed as French when they win, and have their foreign origins emphasized when they do poorly.

But this team has won. Decisively, with a team culture that is fraternal and joyous. They control their own narrative thanks to social media, their Instagram stories bringing fans right into their daily lives. Social media gave us the sight of Mendy and Pogba urging president Emmanuel Macron to hit the dab with them in the locker room after the championship, and the next day, the picture of Pogba with midfielder N’Golo Kanté’s family at the Elysée Palace celebration. Kanté grew up in the Paris banlieue but his mother and aunties look and dress as they would in Mali. Pogba greets them respectfully and sits, in the middle of the madness, to talk to Kanté’s mother like a good son. Someone says alhamdullilah. We are at the seat of French power. This is France. It is French. It is African.

The French team are French. They represent the Republic, and its changes. Young, triumphant, influential, beloved, they are drivers of the culture and they know it. Those both in France and outside who co-opt them into tired ideological frames—politicians like Macron, diplomats like Araud, satirists like Noah—do so at their own risk. These young guys are miles ahead, having fun, blazing the trail. 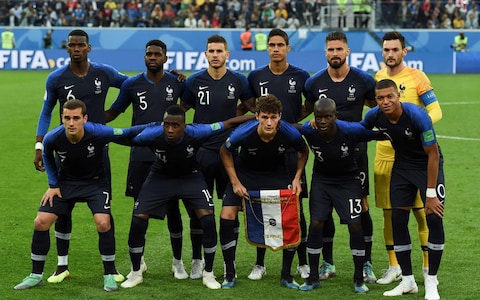