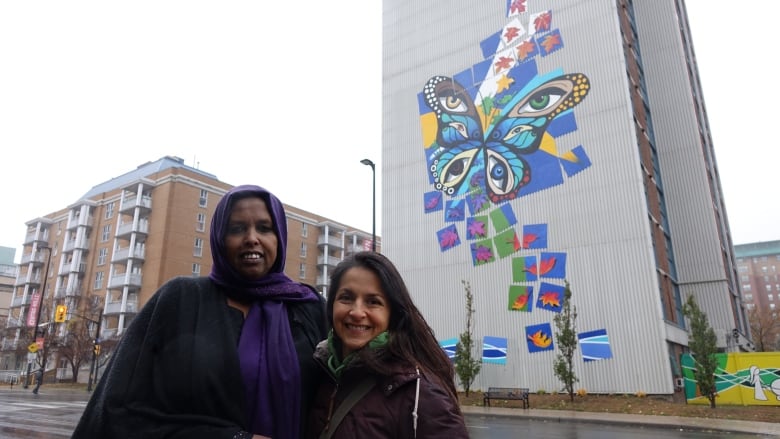 Hindia Mohammoud, left, is the director of the Ottawa Local Immigration Partnership. She and artist Claudia Salguero, right, spearheaded the creation of this nine-storey mural on an Ottawa Community Housing building at Rideau and Wurtemburg streets. (Giacomo Panico/CBC)

A nine-storey butterfly mural in Lowertown that touches on themes of change and diversity is officially Ottawa’s largest.

Transformation, which was designed by artist Claudia Salguero, adorns the outside wall of an Ottawa Community Housing apartment building at the corner of Rideau and Wurtemburg streets.

It was unveiled Saturday afternoon.

“The symbol of butterfly is about movement, it’s about growth, it’s about change and it’s about … transformation, which is what immigrants bring to this city,” said Hindia Mohammoud, who helped spearhead the project.

“[It intends] to convey to newcomers that Ottawa welcomes them; that we value their journeys,” Mohammoud told CBC Radio’s In Town and Out ahead of the unveiling.

Designed by more than 60 newcomers, artists

Salguero designed the mural with the help of more than 60 people, including newcomers from different cultures, languages, ages and genders.

She also worked with Indigenous artists like Charlotte Aki-Stevens, who lives in the neighbourhood.

“When the community comes together in an art project for the community, it just brightens people’s day,” said Aki-Stevens at Saturday’s unveiling. 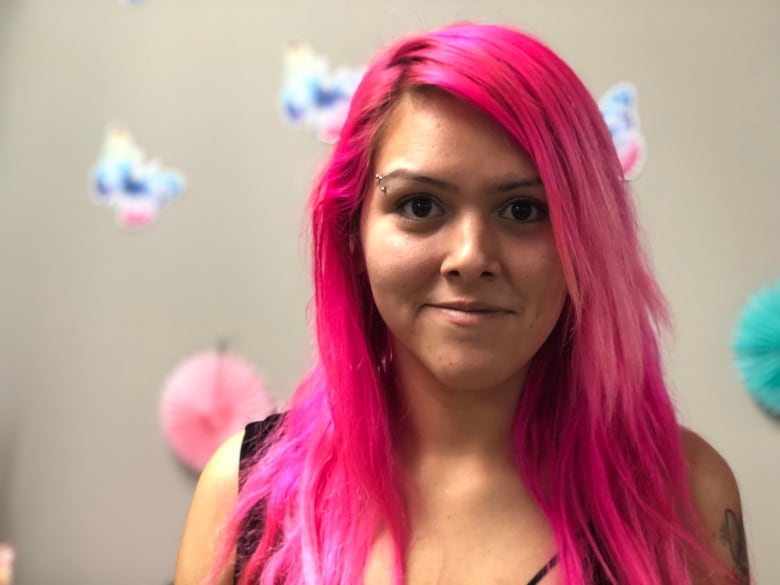 Charlotte Aki-Stevens is an Indigenous artist who took part in the mural project. (Krystalle Ramlakhan/CBC)

“Whatever culture you come from, it’s always nice to see art and colour … it brings everyone together a little bit more,” she said.

Zaineb Al-Faesly, who moved to Ottawa from Iraq about 11 years ago, said participating in the art project offered a creative stretch from her studies in civil engineering.

“Stuff like this really kind of comes close and dear to my heart because I know when I first came here, we didn’t know much,” said Al-Faesly, who’s soon to begin her master’s degree. 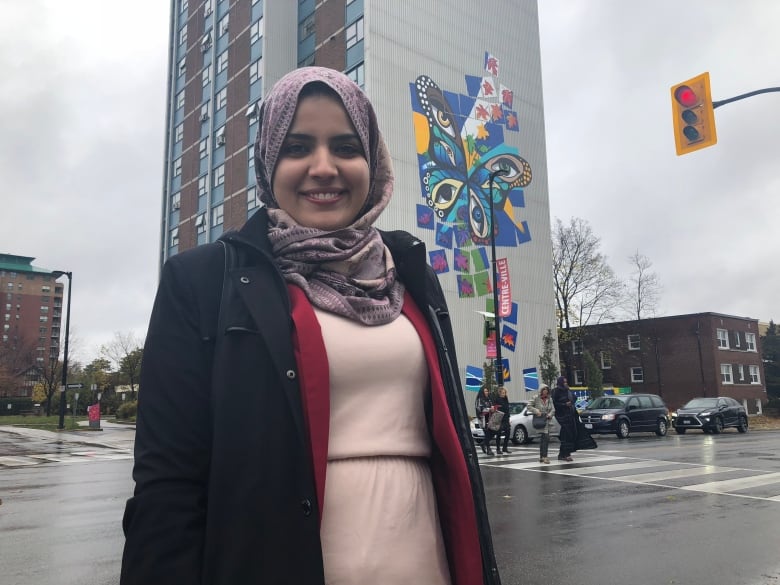 Zaineb Al-Faesly is proud of the fact the mural focuses on diversity, as she was once a newcomer to Canada herself. (Krystalle Ramlakhan/CBC)

Al-Faesly said the mural project brought together people from many different backgrounds, and felt it would help counteract stereotypes.

“I see a lot of those people who are immigrated, or are refugees, and they have such a strong impact on our community. They’re very vibrant people who give back so much,” she said.

The wings of the butterfly feature piercing eyes in various colours that look out over the downtown neighbourhood.

The skin around the eyes comes in a multitude of shades and colours — a symbol of the diversity of the people involved in the mural’s design.

“The butterfly represents us as a community, us as a diverse community in Ottawa,” Salguero told In Town and Out.

“This is, to me, a dream come true — to see a butterfly this big flying in Ottawa, in a very public space like this corner.” 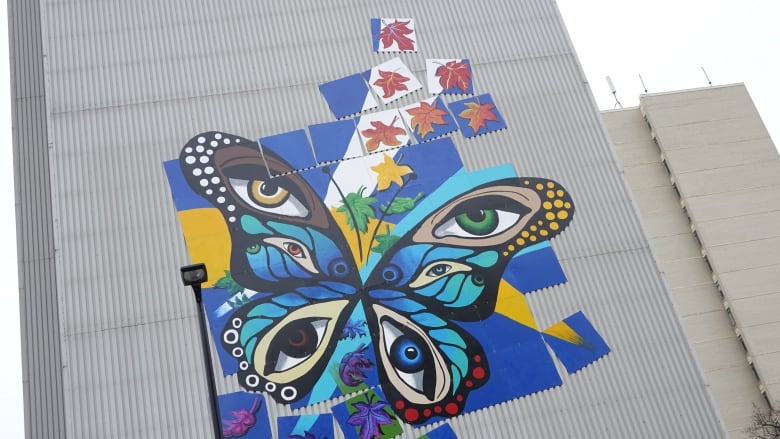 The mural ‘Transformation’ was unveiled Nov. 3, 2018, on this community housing building in Ottawa’s Lowertown neighbourhood. It’s the largest in the city and aims to both celebrate Ottawa’s diversity and highlight the importance of inclusion. (Giacomo Panico/CBC)

Salguero said designing the mural as if it were missing lines and pieces was an intentional choice, calling it a way to address anti-immigrant and anti-refugee rhetoric.

“Those are those voices missing. And I would love people to understand that and be part of this big message. Like, believing in each other and helping the community to live in peace,” Salguero.

The project was supported by several community groups in the city, including settlement organizations. It will be showcased during next year’s Welcoming Ottawa Week, an annual week of events to welcome and celebrate newcomers.

“It exceeds our expectation, [both] the artist’s works and the participation of so many community members,” Mohammoud said.