Rahema and Elizabeth Muzaliwa had immigrated to Canada from Congo 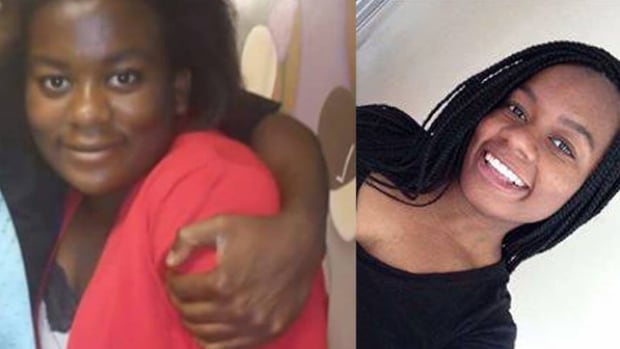 Rahema (left) and Elizabeth (right) Muzaliwa died in a crash on Mitch Owens Road on the morning of Dec. 9, 2016. (Facebook)

Two teenage sisters described as “the life of the party” have died and their mother is in serious condition in hospital after their car and a dump truck collided near the intersection of Mitch Owens and Bowesville roads.

The collision happened just after 8 a.m. Friday. The car was heading west and the dump truck was heading east when one of the vehicles lost control, police say, and collided with the other. 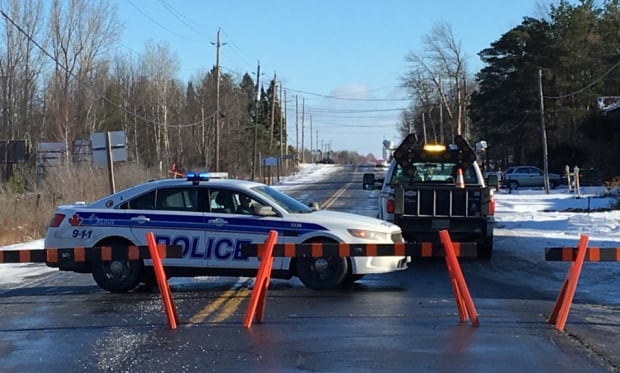 An Ottawa police cruiser guards the scene of a fatal crash on Mitch Owens Road on Friday morning. (Roger Dubois/CBC)

The two teens pronounced dead at the scene have been identified as Rahema and Elizabeth Muzaliwa of the Ottawa neighbourhood of Greely.

Their mother, the driver of the car, was taken to hospital via air ambulance in critical condition, paramedics said. Her condition had improved to serious but stable later Friday, police said.

‘Beautiful to the core’

Pastor Raymond Grant with Bible Way Ministries said the family immigrated to Canada from Congo. He said the three were likely on their way to their school —  a private Christian learning centre in Nepean affiliated with the church — when the collision occurred.

Grant said the sisters were “the life of the party” and central to the culture of the school. He said there was “not a joke in our school that those guys are not in the middle of” and that they were “beautiful to the core.”

“Their absence is sucking all of the oxygen out of the room,” said Grant.

The sisters were “the body and breath and the vitality of every action that takes place in our school,” he added.

The deaths are another blow to the family, says Grant, after their brother was seriously injured by a vehicle on Bank Street last year. 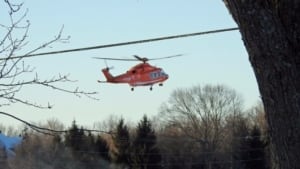 An air ambulance hovers near the scene of the crash on Friday morning. (Jim McCuaig)

“Roads out here are quite icy. The investigation will conclude whether road conditions played a part in the accident or not,” Wasson said.

The driver of the dump truck was taken to hospital in a land ambulance in stable condition.

Mitch Owens Road had been closed between Manotick Station and Bowesville roads but reopened Friday afternoon.

Hundreds gathered at the Bibleway Ministries church in Nepean Saturday for the double funeral of two teen sisters killed instantly when their car collided with a dump truck on Mitch Owens Road more than two weeks ago.

Long-stem red roses lay at the feet of both Muzaliwa sisters on top of their twin open caskets at their Christmas Eve funeral. A white banner on each flower arrangement spelled their names: Elizabeth and Rehema.

The Pentecostal congregation, full of grief, still sang, clapped and danced as they worshipped.

“You give and take away, my heart will choose to stay,” worshippers sang, in chorus, about God.

The collision on Dec. 9, happened shortly after 8 a.m. Mother Bernadette Muzaliwa was driving Elizabeth, 18, and Rehema, 16, to church when they collided with the truck. The daughters were pronounced dead at the scene. Firefighters removed Bernadette from their mangled car and paramedics airlifted her to hospital in critical condition.

Bernadette, with a broken arm, broken ribs and a fracture in her back and in a wheelchair with a hospital bracelet still around her wrist, attended her daughters’ funeral and said she wishes her “two beautiful girls” will “sleep in peace.”

The family’s story has touched not just their church and family members but the community at large and is compounded by earlier hardship. Two years ago, the girls’ older brother David, was struck by a car at Bank and Heron roads while out for a run. David suffered serious injuries and was in a coma. His family was told he might not fully recover.

In a eulogy for his daughters, Kayamba Muzaliwa said that when he came to Canada from the Democratic Republic of Congo in 1990 he was surprised to find prospective employers ask him what experience he had for a job as a dishwasher. The congregation laughed, but Kayamba explained that he knows now the importance of experience.

“Now, I have experience in tragedy,” he said.

Kayamba was at home the morning of Dec. 9 when he heard a knock at the door. A police officer came in and asked if he was alone and then insisted on waking his son up, too, before telling them what had happened. Before leaving to go see his wife in hospital, after learning of the deaths of both his daughters, he asked police for a moment to pray.

“I needed God’s strength,” he said.

“We should not be crying here,” he said. “To us, these girls are not dead. They went back home.”

David told the church that he put his sisters’ lives first, second to his own.

“My love for both my sisters will live for eternity until God calls my name,” he said.

David turned to their caskets and spoke to his sisters in Swahili, a language he was teaching them. He asked them to be with him, always.

A steady stream of mourners hugged the family, many lingering with David and holding him close before taking their seats in what would later be a standing-room only service, with overflow rooms live-streaming the funeral.

The church shared with the congregation messages of condolences, some from complete strangers who heard about this unexpected twist of fate and were touched by the Muzaliwas and wished them continued strength. Carleton MP Pierre Poilievre sent a letter saying that the grieving community can take comfort in knowing that the Lord has a plan for each of them.

The parish, too, heard a letter from Ottawa police Const. Jennifer Simpson, who was one of the first officers on the scene of the fatal collision that claimed the Muzaliwa sisters’ lives. She couldn’t attend the funeral because she was on duty, Pastor Raymond Grant told the congregation.

“As first responders, we get up everyday hoping to help our community,” the officer wrote in a letter to the church.

The crash was a “harsh reminder” that oftentimes life “defies understanding,” Simpson said.

As a police officer, she witnesses tragedy and miracle and told the church she saw both on Dec. 9th. The sisters’ deaths was tragedy, but their father, turning to God immediately afterwards was a miracle, she said.

“It’s a reminder that all that is good can triumph in the world,” Simpson said. For “police officers who encounter evil in this world,” that moment “was a miracle.”

“We stand with you today,” Simpson wrote.

Bernadette Muzaliwa and both her daughters were popular employees at a neighbourhood Tim Hortons. Bernadette had left the restaurant a few years ago to help tend to her son David, who was seriously injured when struck by a car.

Kayamba has had to leave his job as a truck driver to help David’s recovery while his wife mends and the restaurant has begun a fundraising campaign to help the family.