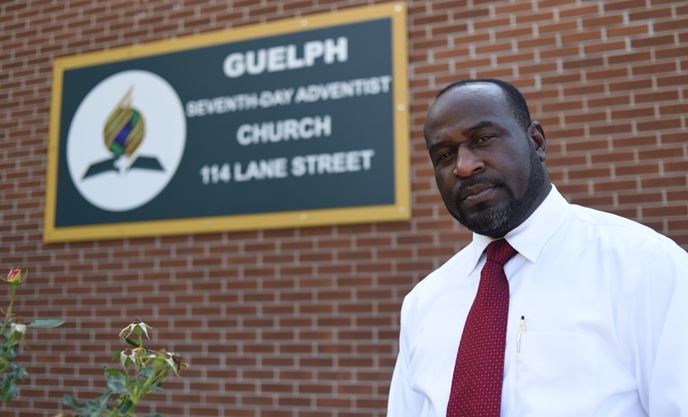 Pastor of the Seventh-Day Adventist Chruch in Guelph, Selburn Fray, said he was “horrified” when he first discovered the hate-filled graffiti someone had spray painted on the church building last week. – Chris Seto, Mercury Tribune

Words of hate, scrawled in black spray paint, stains the rooftop of the Guelph Seventh-day Adventist Church on Lane Street.

Discovered on Wednesday, church leaders were shocked, frightened and disgusted to read the hate-filled message sprayed onto the grey shingles. The message reads: “i hate n—— and god i am Black Jesus.”

“I was horrified when I saw it,” said Pastor Selburn Fray, the leader of the church. He said it must have happened sometime between Aug. 5 and 9.

“There’s always been an attack on the church since its inception, but not in this manner,” he said, speaking of Christianity as a whole. Not with using the word “hate” against a group of people who attend the church.

When he broke the news of what happened to his congregation over the weekend, many were alarmed and concerned. The janitor, who occasionally arrives at the church and works alone, was “mortified” about continuing their work, he said.

“They were also worried for me, because sometimes I’m here by myself.”

The Seventh-day Adventist Church is multi-ethnic. Every Saturday around 40 members come out to worship, Fray said. These are people of all colours and of backgrounds.

Opoku Adjei-Afriyie is the head youth leader at the church. On Monday, he broke the news to youth group over the mobile messenger service WhatsApp.

“They were quite disgusted with it,” he said.

His personal reaction was more of shock and disappointment: “Aw man. In Guelph?”

He’s been attending the church for 14 years and has never seen something like this before in his city, a city that he loves.

“I understand it was some one-off guy or girl,” he said. “It doesn’t make this city any less vibrant or great.”

‘Racism has no borders’

While it may have been a random event, Adjei-Afriyie said he believes it was a targeted attack. Clearly the person must have known that black, or, non-white people go here, he said.

The attack was also likely influenced by the current political climate in the United States, he said. With the ongoing war over being politically correct, it’s become much easier to abuse others under the guise of free speech. White nationalist groups like neo-Nazis or the KKK have been emboldened to rise up within this changing culture and it’s not like this can only happen in the U.S., he said.

“Racism has no borders.”

“I believe that what happened here to us has been influenced by what’s been happening in the United States, where people think it is OK to do this thing, and once they do it then fine, nobody will say anything.

“We’re putting people on high alert here,” he said, adding he’s concerned that eventually the disturbing violence seen in Charlottesville, Va., over the weekend could end up crossing the border into Canada. “We don’t want to be the first church that is attacked here on a Saturday.”

Fray said the church head office, the Ontario Conference of Seventh-day Adventist, is now looking at installing cameras at all their churches around the province.

Here in Guelph, the deacons will double as security guards, Fray said. From time to time, they will now have the task of walking around the building and being a little more vigilant toward who’s coming and going.

He said if the church community ever finds out who did this, there would be no anger shown toward them. Instead, the church would welcome the individual, or group, with love and forgiveness.

“Even though someone may do this, we’re open to forgive and to welcome them with open arms.”