On Monday, less than 72 hours after he was last seen at the concert, his body was found floating in the St. Lawrence River.

What happened in between is still under investigation, but Obiagboso’s mother says she’s yet to hear a scenario that makes sense.

“I think Collins just moved with the wrong crowd and he was the victim of circumstance,” Georgina Mensa Boboe said while struggling to hold back tears.

“Whatever it is that went wrong, we really don’t know until police finish all the investigation.”

Obiagboso was last seen at around 7:30 p.m. on the festival’s opening night.

Travis Scott was slated to headline that evening and it was a show her son was looking forward to, Boboe told CBC’s Daybreak.

He didn’t see the show and, by late Friday night, his friends were at a local police station asking for help locating Obiagboso. On Sunday, Montreal police opened a missing person file

His body was discovered on the South Shore Monday afternoon. Quebec’s coroner is investigating. Mariam Sammuel has been close family friend since Obiagboso was a child.

Sammuel said she had a bad feeling about the festival and tried to talk him out of going. She wanted him to go with her on a trip in Ontario instead, but he really wanted to go celebrate his birthday with his friends in Montreal.

She last spoke with Obiagboso on Friday morning because he was staying at her place in LaSalle while she was away. Everything seemed fine, she said. He had the key and had checked in as planned.

That evening, as Toronto rapper Nav performed on stage, Obiagboso’s friends reported he was feeling overwhelmed and left the crowd. That was the last time they saw him.

Sammuel said the friends’ story has changed some since those first few days.

“If somebody is changing the story every now and again, there’s something wrong somewhere,” she said, adding that Obiagboso, coming from a Christian family, was not the type to abuse intoxicating substances.

Sammuel ‘s son, a longtime friend of Obiagboso, has started a GoFundMe page to help the family pay for funeral costs.

Toxicology findings will not define ‘who Collins was’

Boboe is now waiting for the results of toxicology tests. She wonders if her son was “given something that was too strong for him.”

No matter what the results are, she hopes Obiagboso’s memory won’t be marred by the findings. She said it will not describe “who Collins was.”One of the last text messages he sent to his mother read, “You are the best mom in the whole world.”

“He just did it out of the blue and I texted back. I said,  ‘You are the best son in the world,'” Boboe said.

Single and pregnant, Boboe immigrated from Nigeria to Canada with hopes of giving her baby a better life. Her son was born in Montreal seven months after she arrived.

Boboe moved to Calgary with her son when he was 14 before they settled in Ottawa. Obiagboso, who attended De La Salle high school, had plans to attend university in the coming year.

“Collins was a loving and caring and gentle and kind-hearted young man,” Boboe said.

“Whenever he is around, he warms up the whole place. I wish people could get to know him for who he really was.”

Boboe told CBC News that she wants to know more about the security Osheaga had in place. It was a new venue, she said, and the security “wasn’t strong enough” to protect her son.

The festival is one of several that have been temporarily moved to Île Notre-Dame due to construction on Île Sainte-Hélène.

Event organizer Evenko has not reached out to her personally, Boboe said. 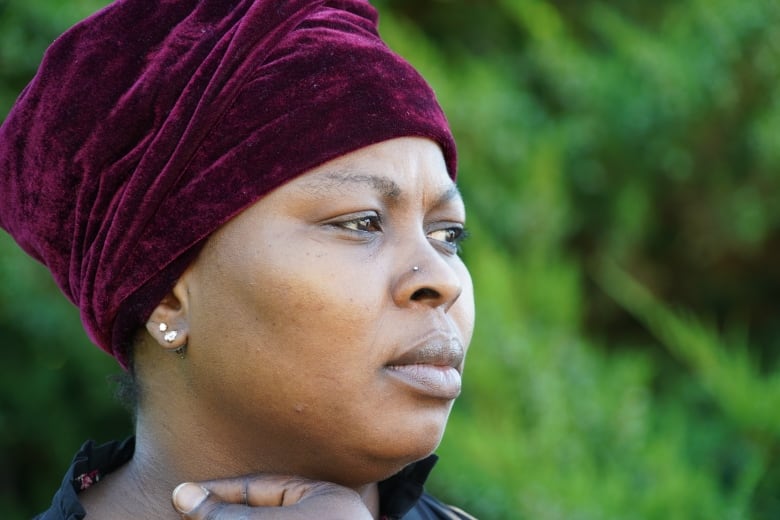 Georgina Mensa Boboe is waiting for the coroner to release her son’s body so she can take him home to Ottawa. (Charles Contant/CBC)

A statement issued by Evenko said the company is “deeply saddened and our thoughts are with the entire family of this young man.”

The well-being and security of festival goers, it states, is Evenko’s “number one priority.”

“Our security measures are in constant evolution to ensure they remain above the required standards towards major events.”

of the passing of our brother and Ottawa resident, Mr. Collins Obiagboso

“loves people, loves being around people, and wants to make people laugh.

He’s the type of person who could give you the shirt off his back”;

while his friends describe him as being

His memory will forever live with us.