Probe would examine how race influences how officers are hired, assigned and promoted

Six months after Somali-Canadian Abdirahman Abdi died in what witnesses described as a violent arrest, the “Justice for Adbirahman” coalition called for an independent third-party audit into the diversity of the Ottawa police force.

Dahabo Ahmed Omer, who is part of the coalition, told the Ottawa Police Services Board meeting Monday night that the audit should analyze the role of race in the hiring, assignment, retention and promotions of police officers. 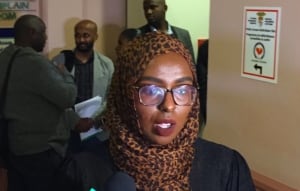 Dahabo Ahmed Omer is calling on Ottawa police to bring in an independent, 3rd party to review how race effects the way the force hires and promotes officers. (Stu Mills/CBC)

“Real and meaningful change can only begin when we accept that there is a problem and the community is looking to you for leadership in this area,” she said.

Younis Mohamed, another member of the coalition, said an audit would be proactive rather than reactive.

“They need to be on the right side of history,” Mohamed said. “Instead of giving complaints to the police all the time, we’re actually giving them an action plan.”

In July 2016, police were called to a coffee shop in Ottawa’s Hintonburg neighbourhood on reports that a man was groping women. Witnesses said 37-year-old Abdi — who suffered from mental illness —  was pepper sprayed, beaten with a baton and punched in the head during an arrest outside his apartment building not far from the coffee shop.

Ontario’s Special Investigations Unit is investigating the actions of two officers involved in the July 2016 arrest.

Before the meeting began, Bordeleau acknowledged the existence of racial profiling, and prejudices in both society generally, and in policing. 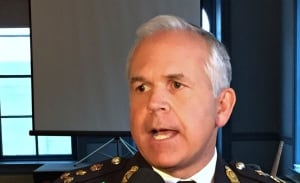 Bordeleau said a diversity audit is an important tool to ensure that all members of the police service are treated equally and have access to the same opportunities.

​Omer said the review could help the force rebuild trust, credibility and transparency. She also said the research would establish a baseline from which to evaluate long-term change in the diversity of the service.

“We were hoping for a completely external audit,” Omer said, adding that an internal audit is “a first step and it’s a positive step.”

Bordeleau ​did not say when the results of the review could be expected.

In December 2015, the Ottawa Police Service agreed to conduct a gender equality audit as part of a settlement in a case before the Human Rights Tribunal of Ontario. A female Ottawa police officer claimed she was “denied training, job placement and promotion opportunities because of her family status, sex and maternity leaves,” according to the Ontario Human Rights Commission.

The independent audit, released nearly a year later in November 2016, found that women on Ottawa’s police force often endure sexist behaviour as they struggle under a workplace culture that’s stacked against their advancement.

Mohamed said that difficult exercise of self-reflection that came out of the gender audit might have prepared police for a diversity audit.

“The gender audit had been an opportunity for them to go through that as an organization. I think it softened the blow.”