The words were as hateful as they were unexpected.

But the racist message painted in bold black letters on her garage door, hasn’t fazed Dr. Xaviere Kuate and her family.

“It’s just life and life has to go on,” said the 46-year-old family physician and mother of three.

“I’m surprised it happened in the neighbourhood. But I’m not really shocked because I’m black and I know racism exists.”

Kuate and her husband have lived in their house on Merganser Street near the Aviation Parkway for 16 years and it’s the first time they’ve ever been targeted like this, she said.

Kuate was asleep when a neighbour rang the doorbell at 2 a.m. on Saturday to alert the family to the graffiti. The neighbour was too embarrassed to even tell Kuate what it said, but called her out to the driveway to see for herself. The neighbour went home to get cleaning supplies, but the two women couldn’t clean the paint off. Kuate went back to bed since she had to drive her 16-year-old son to a basketball tournament in Toronto.

Kuate’s children had differing reactions: Her son took photos he posted to social media. Kuate’s 14-year-old daughter has stayed mostly silent but her 10-year-old daughter said she was scared and upset by what had happened and asked to be allowed to come with her mom on the Toronto trip.

“To be honest, when I went back to bed at around 4 o’clock I had trouble sleeping too,” Kuate said. “I wondered if they were going to come back.”

A police officer came Saturday morning and took photos of the damage. Ottawa police could not say Monday if the incident had been referred to its hate crimes unit.

“It’s disappointing, but it’s not surprising. Any person of colour is going to experience incidents of racism,” said Rideau-Rockcliffe Coun. Rawlson King, who was sworn in just two weeks ago as Ottawa’s first black councillor.

“It’s not something that should be tolerated and we should ensure that we speak loudly about racism like this,” said King, who visited Kuate on Monday afternoon.

Ottawa-Vanier Liberal MP Mona Fortier said she was deeply troubled by the incident.

“We must all publicly condemn these sorts of actions because when we fail to denounce racist acts with total conviction we empower the small minority who wish to spread hatred and incite violence,” Fortier said in a statement.

Meanwhile, neighbours have rallied around Kuate and her family. They’ve received cards and a bouquet of flowers. Others have offered to help clean and repaint the garage door. Kuate, who got back from Toronto on Sunday night, said Monday she’s been too busy to do anything about the graffiti.

Kuate emigrated from her home country of Cameroon when she was 19 and spent a decade in Belgium before moving to Canada 20 years ago. She encountered some racism in Belgium, but little in Canada. In 12 years of medical practice, she’s had just two patients who’ve said racist things to her.

She has no idea who could have targeted the family. Neither she nor her children have made any enemies that she knows of.

“You think it might have been teens, but you would think teens would have done it really fast and run away. But they used an apostrophe and an exclamation point, so who knows? It’s all just speculation.”

The family will consider installing security cameras for their protection, she said.

King said the incident could be linked to the rise of populism and far-right groups that are taking out their anger on immigrants.

“It’s a high irony because Canada is a country of immigrants,” he said.

“The last time I was called n—-r was two years ago as I walked down Cyrville Road from my work. It seems abnormal to other people, but for people of colour, that’s just their every day experience.” 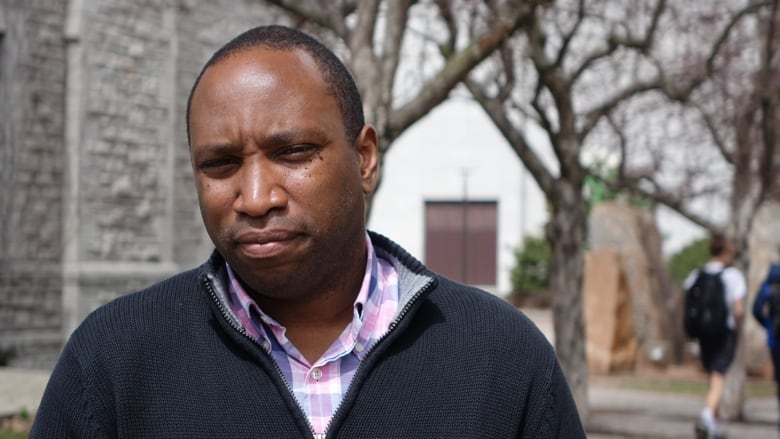 Coun. Rawlson King said he plans to meet with police to talk about the importance of combating racist incidents such as the one that occurred in his ward on the weekend. (Jean Delisle/CBC)

Ottawa’s black community is reacting with anger and disgust after a family’s home was spray-painted with racist graffiti over the weekend.

Late Saturday night or early Sunday morning, someone left the message “N–gers, out!” scrawled in black letters on the garage door of a home on Merganser Street, near the Aviation Parkway and Montreal Road, east of the core.

We really need to combat racism, call it what it is, and say that this is not going to be tolerated.– Coun. Rawlson King

In their initial response to CBC on Tuesday, police told CBC the call for service regarded “mischief to property related to graffiti,” and that they had closed the case because there was insufficient evidence to lay charges.

That’s despite widespread condemnation from community members and elected officials, including the area’s city councillor, Rawlson King, who said he met with the homeowners on Monday.

Coun. Rawlson King says racism is still an unfortunate reality for many in Ottawa’s black community. 0:31

“Somebody who lives in their home, especially when they’ve lived there for 16 years, should feel safe in their home and in their community, and it shouldn’t be tolerated at all,” said King, who was elected in a byelection last month and is Ottawa city council’s first black member.

On Twitter, King called the vandalism a “cowardly act of hatred.” 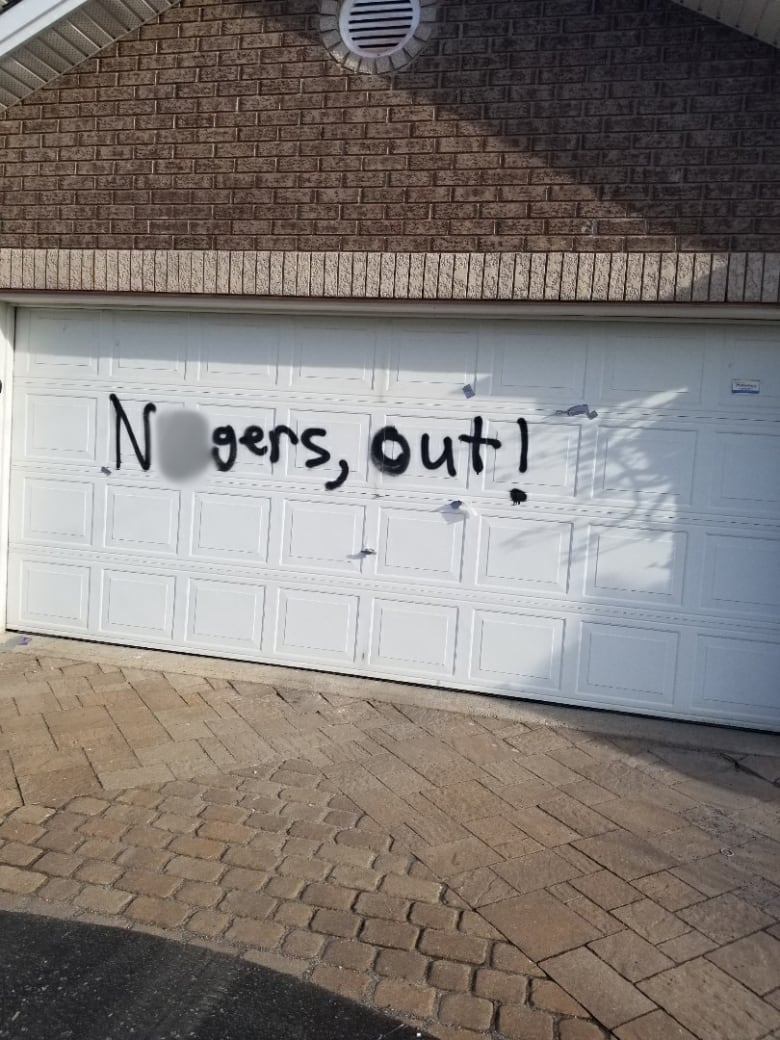 This message was spray-painted on the home of a black family. (Supplied)

“I’m extremely disappointed,” Bailey said. “I feel as a racialized person, when you call that mischief you are denying the severity of it.”

Bailey was targeted with the same racist slur spray-painted on the front doors of Parkdale United Church during a spate of vandalism in November 2016. 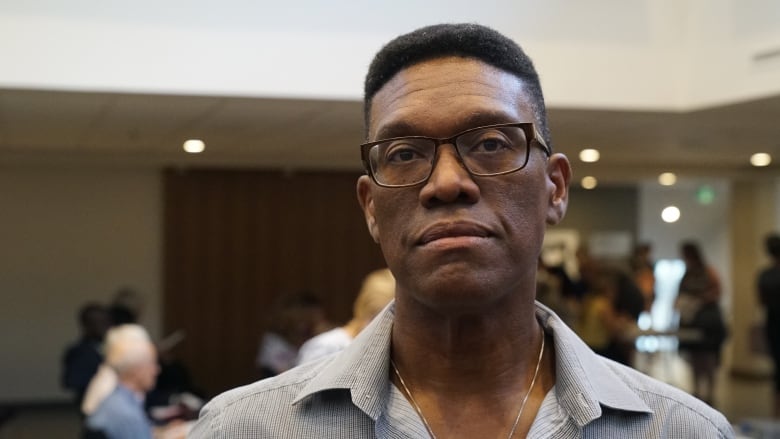 ‘Call it what it is’

“I think that we really need to combat racism, call it what it is, and say that this is not going to be tolerated,” King said. “There’s been an erosion of trust, and in order to build more trust, it’s important that the police service is addressing those issues with vigour.”

In a clarification attributed to Supt. Chris Renwick on Tuesday afternoon, the Ottawa Police Service said: “The Merganser St. incident is one of graffiti (hateful content) that was spray-painted on a garage door — with no persons of interests [or] leads … the file was closed by the responding patrol constable.”

A police photographer documented the graffiti, according to the statement.

“Should any leads surface, [the case] will be assigned.”

A local business cleaned up the graffiti on Tuesday.