Relations between police and Ottawa’s minority and marginalized communities were front and centre Wednesday at a public consultation as residents called for greater transparency and accountability from the province’s Special Investigations Unit.

The meeting was one in a series of public consultations that have been carried across Ontario since last month. They’re being conducted by an independent review panel led by Justice Michael Tulloch.

Tulloch has been tasked with reviewing the province’s three police oversight bodies: the SIU, the Office of Independent Police Review Director (OIPRD) and the Ontario Civilian Police Commission (OCPC).

The duties of the police watchdogs in Ontario break down like this: The SIU investigates cases of serious injury, death and sexual assault involving police; the OIPRD handles all public complaints about the police; the OCPC hears appeals from police disciplinary action and investigates chiefs, officers and members of police service boards.

“I’m free to critically examine how these bodies operate,” Tulloch told about 75 people gathered at the Wabano Centre for Aboriginal Health on Montreal Road.

Ewart Walters, who was editor and publisher of the Spectrum newspaper for nearly 30 years, expressed a view seemingly shared by the majority of people in the room.

“All reports by the SIU should be made public immediately,” said Walters, who now works as a community consultant and is well known in the black community in Ottawa

The majority of participants also agreed on the need to collect data on race and ethnicity, and to make it public. Wednesday’s consultation followed Monday’s release of data showing that Ottawa police disproportionately pull over Middle Eastern and black motorists.

It also comes as a community is still struggling with the death of Abdirahman Abdi, a Somali-Canadian, in July after a violent confrontation with Ottawa police. No cause of death has been released, and the matter remains under investigation by the SIU.

Ontario Premier Kathleen Wynne said last month during an editorial board discussion with the Citizen that she supports the public release of the police oversight report into the death of Abdi, though some parts would likely be withheld due to privacy concerns.

Dahabo Ahmed Omer, co-chair of the Justice for Abdirahman Coalition, said Wednesday that what she heard from the public made it clear that the “SIU needs to do better.”

Omer said she left the meeting feeling hopeful that Tulloch’s final report will reflect the recommendations heard by the independent panel.

Tulloch’s mandate was amended earlier this month to “engage with Indigenous communities to ensure the review is informed by Indigenous perspectives.”

Ottawa police Sgt. Chris Hrnchiar is facing a disciplinary hearing on two Police Services Act charges of discreditable conduct for what Chief Charles Bordeleau has said were racist online comments on a news report about the death of acclaimed Inuit artist Annie Pootoogook. Bordeleau has said that Hrnchiar’s comments undid some of the good work his officers were doing with Ottawa’s indigenous communities.

A couple of Ottawa police officers said they came to the consultation to listen to the concerns expressed by the community.

Some residents said the officers’ presence made them feel uncomfortable, though at least one person questioned why the police chief himself wasn’t present to hear from the community.

The Independent Police Oversight Review task force was created in April amid calls for greater transparency in police investigations.

Tulloch said he would consider all of the recommendations made Wednesday.

“Your views will be reflected in the final report,” he said.

About the Honourable Justice Michael Tulloch 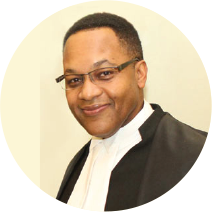 Justice Michael H. Tulloch was appointed a judge with the Ontario Court of Appeal in June 2012. Prior to his appointment with the Ontario Court of Appeal, he was appointed as a judge to the Ontario Superior Court of Justice in 2003 and presided in the Central Western Region of Ontario. Throughout his judicial career, he has presided over all types of cases and conducted numerous civil and criminal jury trials, summary conviction appeals, and divisional court appeals.

Justice Tulloch attended York University in Toronto, and Osgoode Hall Law School. After graduating from law school in 1989, he became an assistant Crown Attorney in 1991, and later worked as a private defence lawyer. He has served as a special prosecuting agent of the Canadian Department of Justice, and participated in a number of reviews and commissions including the Ontario Government Review of Civilian Oversight on Policing, the Review of the Ontario Legal Aid Plan and the Criminal Code Review.