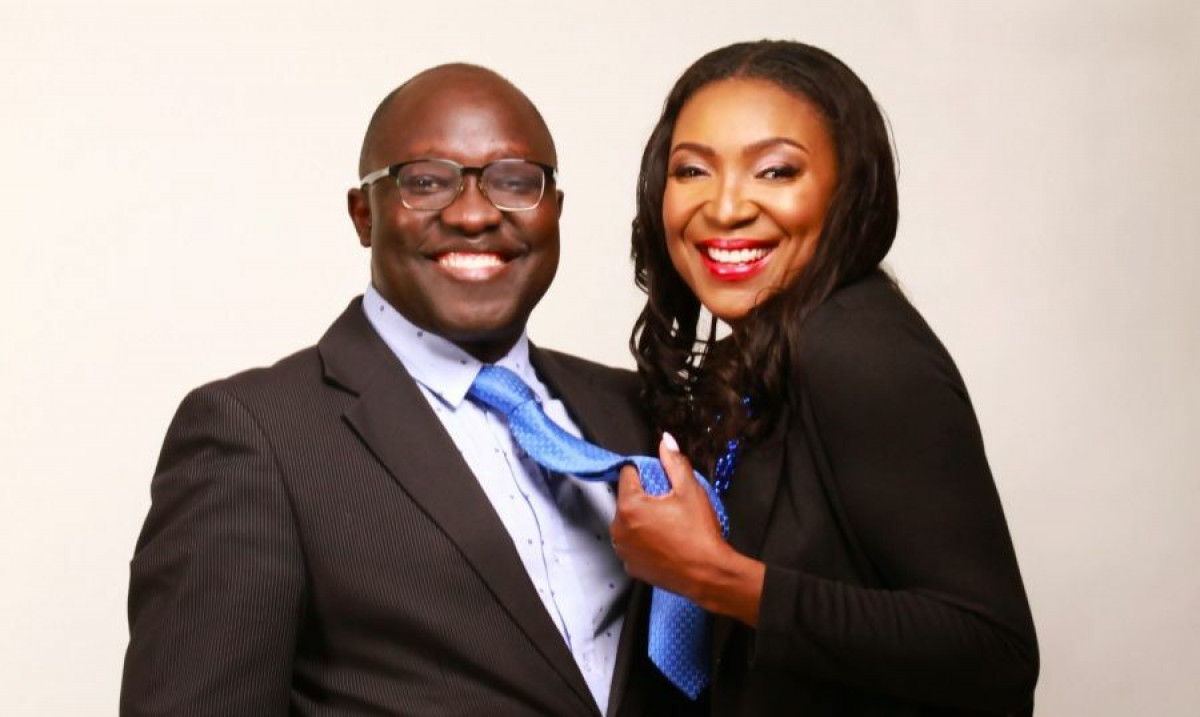 Given “power couple” status by CNN in 2013, Patricia and Moses Mawa know that two is better than one. With 4 regularly scheduled magazines, a 24-hour TV channel, and multiple television programs on 3 other major networks in Canada, with globally syndicated content, the Mawas are the founders and principals of Canada’s largest black-owned media organization.

Patricia is the Executive Vice President of Silvertrust Media and Afroglobal Television, as well as the host of the Planet Africa show on OMNI TV. She is also the Associate Publisher of Excellence, Envision, and Destiny Magazines. In 2008, Silvertrust Media introduced the Discover magazine series, which has since been published with over 20 titles and editions for different nations of the world.

Moses is the Founder, President and CEO of Silvertrust Communications Inc. (also known as Silvertrust Media); the Transformation Institute For Leadership and Innovation, which undertakes the Transformation Awards, the Crossover Mentorship Program for youth to achieve their full potential, and other initiatives. He is also the President and CEO of the 24-hour Afroglobal Television channel.

The Mawas have a heart for unity, community and positive representation.

How did you meet? Was it love at first sight?

Patricia: We met in Ottawa in 2000. I had just come to Canada and heard about Moses from three different people! Someone I met at a conference organized by the Canadian Broadcasting Corporation (CBC) in Halifax gave me Moses’ business card as he was also in the media. One day, I visited his studio, which was in Ottawa at the time, to discuss possible opportunities as I was new in Canada. Moses was too busy to pay much attention. So no, it was not love at first sight (lol).

Moses: Our friendship grew over time and blossomed into the petals of love that is seen today. But truth is that I liked Patricia from the onset and I wished we could grow old together. First of all, I was amazed by her work as a TV host and producer in Nigeria. While I was very busy the first day she came to my office, we quickly became good friends and love developed naturally.

Tell me about Silvertrust Media, how did it begin?

Patricia: Silvertrust Media is a publishing, broadcasting, web design, multimedia, photography, events and special projects company based in Toronto, Canada. My husband Moses founded it in 1996 while he was a student of the Film Studies program at Carleton University in Ottawa. The company used to do video production, photography, graphic design and related services. We also had a lot of Canadian government and foreign diplomatic clients.

In 2004, we moved to Toronto, streamlined our operations and shifted our focus to broadcasting, publishing and online media. Silvertrust became the parent company of Planet Africa, which has included a television show on OMNI, a full-colour glossy magazine, and an international awards program. The company has published 4 regularly scheduled magazines, secured distribution across Canada through Chapters, Indigo, and international newsstands.

Today, Excellence Magazine is a lifestyle publication focused on the Black community; Envision is mainstream, formally called Diversity Magazine and it features success stories from diverse Canadian communities; Destiny Magazine is a Christian lifestyle publication that is a part of our Destiny Harvest ministry brand, and Legacy is an international initiative. Since 2002, we have had the Planet Africa program on OMNI TV. We have also produced Arise, which airs on Vision TV and Destiny, Perspective and Let’s Talk, produced with various partners and aired on YesTV and other stations.

Moses: In 2008, Silvertrust Media introduced the Discover magazine series, which has since released over 20 titles and editions for various nations, including Discover Zambia, Discover Kenya, Discover Zimbabwe, and Discover Nigeria. In 2016, Afroglobal Television or AFRO TV, the 24-hour global super channel was launched by Silvertrust Media. The channel is now available on Channel 708 on Rogers Cable; 2472 on Bell Fibe; 2701 on Eastlink; and Channel 886 on Telus.

AFRO TV serves all people of African descent and our goal is to make it the premier network that advances the aspirations of people of African descent worldwide. If you are Afro-Canadian, Afro-American, Afro-Caribbean or based anywhere including Africa of course, you are a part of the Afroglobal family. However, people of Indian and other racial backgrounds, who have lived in Africa for generations and call Africa home, as well as people interlinked with the Diaspora, are embraced by the Afroglobal project in the spirit of harmony.

How have your backgrounds prepared you for where you are now?

Patricia: I was raised by hardworking parents. I credit them for my work ethic. I also worked with three television stations in Nigeria as host and producer prior to coming to Canada. All these prepared me for this moment in my destiny. In terms of business, when I was a teenager things were tough for my family, I made and sold confectionaries to help support them.

Moses: As a teenager, I was involved with running a company in Uganda that distributed household items like sugar, salt and soap; produce from farmers to exporters, including corn, sesame seeds and beans; as well as construction materials such as iron sheets for roofing, cement and others. My mother, who hailed from South Sudan, did farming, but also made and sold things. My father, who was Ugandan and a police officer, was known for integrity. They were great role models for me.

You have been featured on CNN as well as other news channels. Did you ever believe that you would be where you are today?

Patricia: I am grateful to God for where we are today, but I believe that the best is yet to come. I see big things on the horizon. The half-hour worldwide broadcast that CNN did on us was something that I never expected. I had never seen a CNN crew come from their headquarters in Atlanta USA to interview anyone in Canada. The other day, Moses and I were on an international flight and one of the air hostesses recognized us from the CNN telecast. We got a lot of feedback from around the world, including business opportunities. When we travel out of Canada, sometimes people recognize us in part because of it.

What have been some of the challenges and rewards you have had on the road to success?

Moses: It has not been an easy road. As immigrants, we have to be twice as good to be recognized within certain quarters. People have often told us that anything to do with people of African descent is a hard sell. We have even been told to change the names of our businesses that are connected to Africa. Advertisers, sponsors and investors also hesitate to support initiatives in the community. However, we have found creative ways to engage with them. Our commitment to excellence and resilience has made a big difference. It is the bedrock of our success. For us, giving up is not an option. We stop when the job is done, not when we feel weary.

What do you wish people knew about the road to your success?

Patricia: We hear young people say that they want to run their own businesses so they can be their own bosses and go to work when they want. One thing that is missed is that as an entrepreneur, you also have to work when you do not feel like it. People see the glamour but they do not see the sleepless nights, the times you had to re-mortgage your home to pay for initiatives, the missed vacation opportunities, and the challenges.

Moses: We have people working with us who depend on our mission for their livelihood. They have families and bills to pay. This is a huge responsibility. There is no room for excuses. We have been involved with the business on a full-time basis for a couple of decades now. It takes a lot of guts, faith, hard work, perseverance, and a commitment to excellence in order to soar.

Did you ever experience discrimination on your road to success? If so, how did you overcome?

Patricia: We have experienced discrimination on many levels. Sometimes we email organizations and companies for initiatives related to the Black community and we never get the courtesy of a response. When we send the same email having to do with other initiatives not connected to the community as we have many brands, we get instant responses. There were times when we thought that the folks were not getting the emails, but they were. Once, an event venue told us that their facility was too expensive and high end; yet we stage some of the best events in this nation. That really hurt! We often call the folks out and threaten to use the power of the media. But we also do not want to be blacklisted.

Moses: Sometimes people do not believe that we are the owners of Silvertrust Media or are principals of the Transformation Institute For Leadership & Innovation. Many can’t wrap their minds around the fact that we own a 24-hour television channel until the reality hits them. We are often asked questions that suggest that we are not capable of running such organizations. There is also systemic racism that people of African descent have to deal with. We have heard advertisers say that there is no data or statistics to support the strength of our community. Again, persistence and excellence have enabled us to keep climbing the ladder and making a difference.

What do you hope to see in 5 years time?

Patricia: There is disruption in broadcasting, publishing and many other areas. For this reason, we are working on digital publications and broadcast initiatives. We have created an online streaming and video-on-demand platform for our faith-based initiatives called DestinyStream.com. We are also working on Afroscreen.com, which is going to be an online entertainment and information portal for people of African descent worldwide. We are also developing amazing new apps.

Moses: We are working on getting the AFRO TV channel to the United States of America, Africa, and the Caribbean. We are in the process of establishing a major scholarship fund via the Transformation Institute because we believe in giving back and there are people of goodwill, who want to support that effort. Apart from running a mentorship program, we have sponsored many young people to attend programs to expose them to role models. We want to do more. We co-authored the 150 Extraordinary Canadians legacy book, which is on Amazon. We are soon launching an online portal with videos on these amazing leaders and innovators. We intend to write more and to pursue things of generational impact.

Lucy Oneka is a playwright and journalist. She has covered many stories for Toronto-based newspapers such as the East York Observer, the Scarborough Observer, and the Toronto Observer. Lucy’s other passion is music. She is a two-time semi-finalist of the prestigious UK Song Writing Contest and recently released her own debut gospel album, “You Are Faithful”.