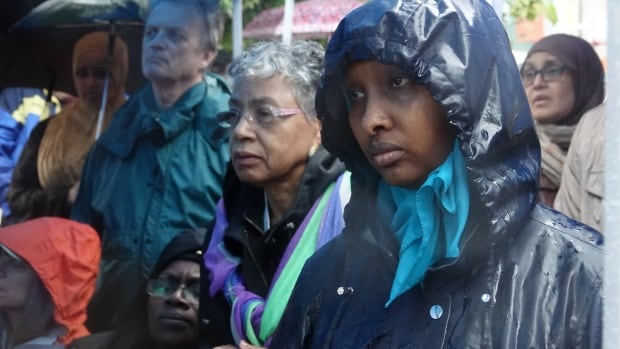 Abdirahman Abdi’s neighbours, as well as strangers from across the city, came to mark the anniversary of his death following a violent confrontation with police, and to call for justice. (Matthew Kupfer/CBC)

Nearly 150 people huddled under tents and umbrellas in heavy rain Monday evening for the unveiling of a plaque in memory of Abdirahman Abdi, the Somali-Canadian man who died a year ago after a violent arrest by Ottawa police.

The plaque was unveiled at 55 Hilda St. in Hintonburg, above the steps where the fatal confrontation with police happened on July 24, 2016. Abdi was pronounced dead in hospital the next day after losing vital signs during the arrest. 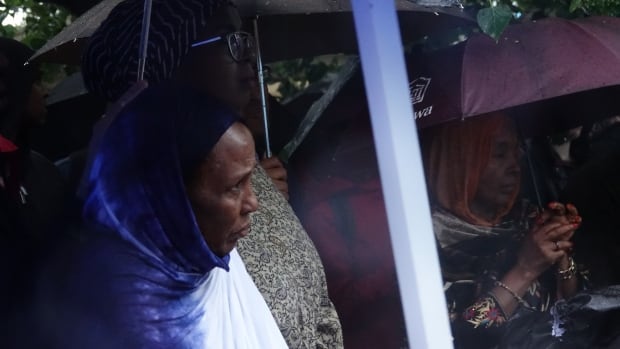 Abdi’s family and members of the Justice for Abdirahman Coalition gathered under tents set up to shield them from Monday evening’s heavy rain. (Matthew Kupfer/CBC)

The plaque includes a verse from the Qur’an about seeking justice, no matter the consequences. It also says Abdi’s “life was unjustly taken” and that his death created an “awakening” in the community.

One of Abdi’s brothers unveiled the plaque and quickly rushed inside afterward, choked up and on the verge of tears.

Const. Daniel Montsion is facing charges of manslaughter, aggravated assault and assault with a weapon in Abdi’s death. He’s scheduled to face a judge-only trial beginning in February 2019. 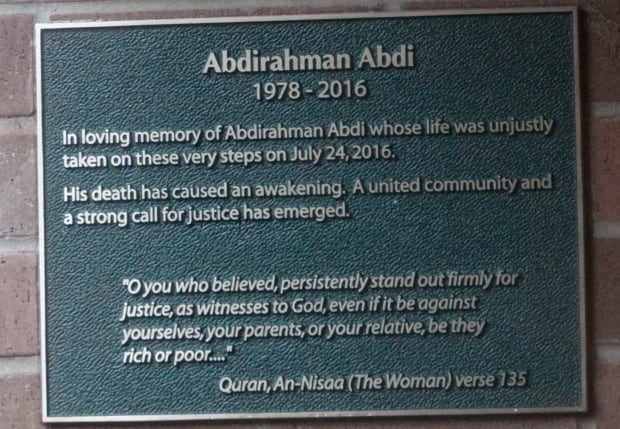 The plaque for Abdi was unveiled by his brother. It includes a verse from the Qu’ran about justice and says Abdi’s death ’caused an awakening.’ (Matthew Kupfer/CBC)

Dahabo Ahmed Omer, co-chair of the Justice for Abdirahman Coalition, said a conviction is needed for the community to feel like justice has been done.

“There were individuals that witnessed what happened, and I think it’s important for the community to know that when something this wrong happens, our justice system is built in such a way that it ensures it doesn’t happen again,” she told CBC News Ottawa anchor Adrian Harewood.

“I think we need to see that go forward for it to feel like justice, absolutely.”

Lelam Abebe attended the memorial for Abdi last year and has lived in Ottawa since he was six years old. He said the incident was a “wake-up call” for him and cast a different light on his own experience with police as a person of colour. 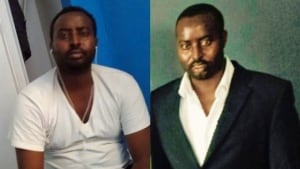 Abdi, 37, died after a violent altercation with police outside his apartment building in Ottawa’s Hintonburg neighbourhood on July 24, 2016. (Supplied)

Abebe started attending community meetings about race issues with police and wants to see the momentum that has built up in the wake of Abdi’s death continue, he said.

Hoden Farah called Abdi’s death unjust and said that while the community supports the police, they want an open dialogue that acknowledges what happened was wrong.

​”Every citizen, whether Somali or any other [group], does not deserve to be treated that way. And it’s important that we — as Canadians, together — stand up for a cause such as this, to prevent any other incidents happening again,” she said. 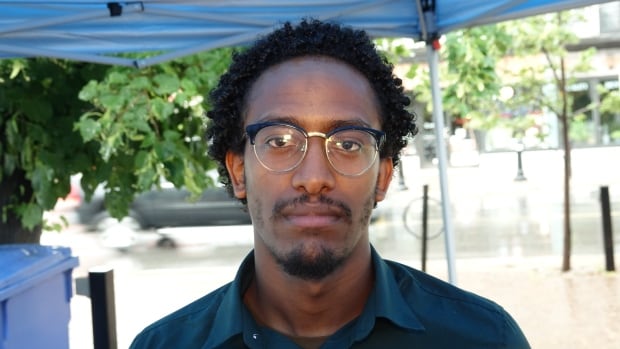 Ottawa police Chief Charles Bordeleau said his service has been working hard to rebuild the trust that was lost and “fractured” after Abdi’s death.

“There’s no question that this has been a difficult year for this police service, for the family and for the officer involved subsequent to the death,” Bordeleau said.

The chief pointed to the creation of an outreach group to engage with members of Ottawa’s Somali community, which heard from more than 1,000 people in its first six months, as an example of the police service’s work to rebuilt that relationship.

Among the issues that kept rising from that consultation were accountability, racial profiling and a general lack of trust. Now that the process is over, Bordeleau said police plan to use the feedback to build an action plan for what they call “bias-neutral policing.”

Police will also conduct a “diversity audit” focused on recruiting and human resources practices, he said. 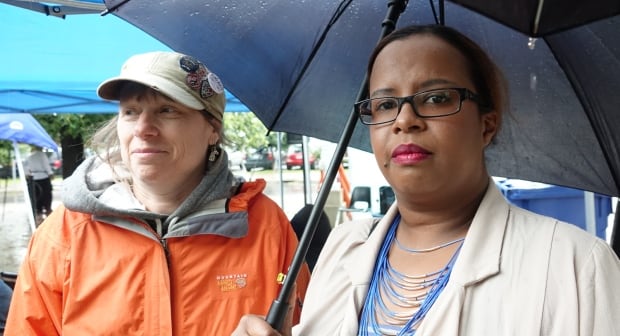 “The community has told us for years that they wanted to ensure that we are reflective of our community,” he said.

“Our members internally have also said that they want to make sure that we are a police service that treats people with equality and gives people the same opportunities as others.”

The conversation is ongoing with the community and members of the Justice for Abdirahman Coalition, he said.

Message from Justice for Abdirahman Coalition

Dear Friends,
Yesterday, July 24, 2017 marked one year since the death of Abdirahman Abdi. The community marked the occasion with a gathering at Somerset Square. Despite the rain, the community came out to show their support to the Abdi family.
We are humbled by all those who came out to support us and we are blown away at the incredible collaboration of all those who helped put on the event. It was a wonderful success!
For those of you who were unable to join us, a key moment in the event last night was the unveiling of a plaque in memory of Abdirahman. The plaque was donated by concerned citizens.
We know this plaque will not bring Abdirahman back, but it is a symbolic gesture.
Last summer when the tragic events occurred, many in the community came to mourn the loss of Abdirahman at the entrance of 55 Hilda where he lost his life. A makeshift memorial emerged with loving words left written with chalk on the walls and side walk. Flowers and candles adorned the tree in front of the building.
Last night, with the help of so many, we placed a permanent fixture, a beautiful plaque at the entrance of 55 Hilda.
The plaque reads:
In loving memory of Abdirahman Abdi whose life was unjustly taken on these very steps on July 24th 2016.
His death has caused an awakening. A united community and a strong call for justice has emerged.
“O you who believed, persistently stand out firmly for justice, as witnesses to God, even if it be against yourselves, your parents, or your relatives, be they rich or poor…” Quran ch 4 vs 135.

​
This verse from the Quran, Verse 135 of Surah Al Nisa (The Women) was chosen because it is one of history’s greatest expressions of justice. It is also the same verse scribed on the Harvard School of Law, at the entrance of its faculty library on a wall dedicated to the best phrases articulating justice.
It will serve as a reminder to all that this community will continue to stand together to support one another, to stand for justice no matter the outcome and to never let this happen to another soul.
The plaque was made and hand delivered by Karl Feige of Alloy Foundry Company. The installation was an in-kind contribution of Blake Lepard and David Boushey of the Centretown Citizens Ottawa Cooperation and made possible with the support and authorization of the Unity Non Profit Housing Ottawa – the property managers for this building. We would like to extend our deep appreciation for making this vision a reality.
We would like to extend a special thank you to Jeff Leiper, his team, the Hintonburg Community Association and OCISO for the integral role in this event.
The delicious fruit platters tonight were generously provided by Executive Chef Mohamed Yusuf and the Orleans Fresh Fruit Market.
Of course this event would not be what it was without our amazing speakers and spiritual leaders:
We want to thank Barbara Faught from the Parkdale United Church who, due to unforeseen circumstances, was unable to be there in person but she was there with us in spirit.
And finally, to the countless community supporters and volunteers tonight, you are seen, you are appreciated! THANK YOU!
CBC news coverage of the event:
http://www.cbc.ca/news/canada/ ottawa/abdirahman-abdi-death- anniversary-plaque-1.4219984
______________________________ ____
Justice for Abdirahman is group based in the NCR and supported by local and national advocacy groups. The objective of the coalition’s campaign is to obtain greater transparency, challenge racial inequity, and bring positive change in order to secure justice for the late Abdirahman Abdi and his family. For any inquires please contact info@justiceforabdirah man.ca
Tweet Pin It