A mosque and a church with a black pastor are the fourth and fifth buildings to be spray-painted with racist graffiti in Ottawa this week, and police are investigating the possibility the incidents might be linked.

The front doors of Parkdale United Church, at the corner of Gladstone and Parkdale avenues, were spray-painted with two Swastikas and the word “n–gers,” as well as the numbers 14 and 88. The number 14 refers to a white supremacist slogan, while 88 stands for “Heil Hitler.”

Anti-black graffiti was spray-painted on the front doors of Parkdale United Church, where it was discovered early Friday morning. The word “n–gers” has been blurred out by CBC News. (Andrew Foote/CBC)

The front doors of the Ottawa Muslim Association on Northwestern Avenue were spray-painted with the words “F–k Allah,” “Go home, “666,” and a swastika.

Rev. Anthony Bailey told CBC Radio’s Ottawa Morning on Friday he was “shocked” to hear about the graffiti at Parkdale United Church, and that “this is a wave of hatefulness that seems to have been generated. People feel emboldened to do this.

“It is shocking, but we as a congregation and as people of faith reject this. We are outraged, but we will not be deterred in our work for love and reconciliation, and bringing people together,” Bailey said. 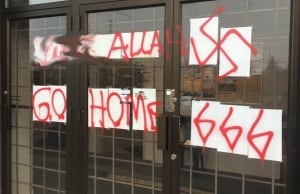 Racist graffiti was spray-painted on the doors of the Ottawa Muslim Association on Northwestern Avenue. The word “f–k” has been blurred out by CBC News. (Andrew Foote/CBC)

Ahmed Ibrahim, speaking for the Ottawa Muslim Association, called the graffiti on the front doors of the mosque “very bad, very scary.

“It’s hate, it’s just hate. Ottawa is a beautiful city, it’s full of love for everyone, it is welcome to everyone,” Ibrahim said. “This graffiti is telling me, ‘go home.’ This is my home. … Canada and Ottawa is my home. It is the Jewish groups’ home, it is the Christians’ home, it is our home. Nobody has the right to say to anyone, go home. This is home for us.”

‘Don’t want to give these people notoriety’ Rev. Bailey speaks with the media.

“We rely on the public to help us out and share any information that they have that could lead to capturing these people.”

Laviolette said it’s too early to tell whether all of the incidents this week are related, but that police are exploring that possibility.

“There are certainly similarities with the first three incidents targeting Jewish institutions, so that’s certainly a theory that we’re exploring,” he said.

This isn’t the first time Parkdale United Church has been spray-painted with anti-black graffiti. It was similarly tagged in January ahead of a special service honouring Martin Luther King Jr.

Bailey told CBC News at the time that the vandals spray-painted the word “n–gers,” as well as “Tupac,” presumably a reference to the American rapper who was shot dead in 1996.

In a later development, a 17-year old young offender was arrested by the Ottawa Police. Under Canadian law, the teen cannot be named because he is a minor. He has been charged with six counts each of criminal harassment and mischief to property, and two counts of possession of a weapon for a dangerous purpose. He also faces six counts of failure to comply with a sentence or disposition under provisions of the Youth Criminal Justice Act.

Court records show he was on probation on other criminal charges when he was arrested on Saturday. 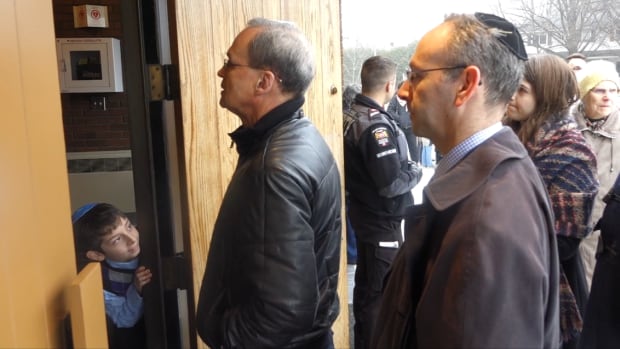 A line stretches back from the door of the Machzikei Hadas synagogue in Ottawa before a multi-faith solidarity gathering on Saturday, Nov. 19. Cameras weren’t allowed inside because it happened on the Jewish Sabbath. (Andrew Foote/CBC)

Down Virginia Drive they came, a steady flow of people lining up to enter the Machzikei Hadas synagogue in south Ottawa on Saturday morning.

Through the doors that had been marked with pro-Nazi symbols two days earlier they went, wearing their hijabs, yarmulkes and crosses until there was no more room in the main hall to hear from an imam, rabbi, pastor and other community leaders about a string of similar acts of vandalism.

Many stuck around in the lobby to read a message of solidarity together, sing the national anthem and hear the surprise news that a teenager was under arrest after another religious building in Ottawa had been defaced overnight.

“This is an amazing show of solidarity with the community. It shows Ottawa’s true colours,” said Samuel Kardash, who was part of the crowd of 600.

“It shows how Ottawa really feels about racism, how there’s no place for this kind of thing in our society, in our city, which has accepted so many people from so many places and cultures.”

“It was a beautiful hour and heartwarming experience for me and everyone who participated,” said Ottawa Mayor Jim Watson. 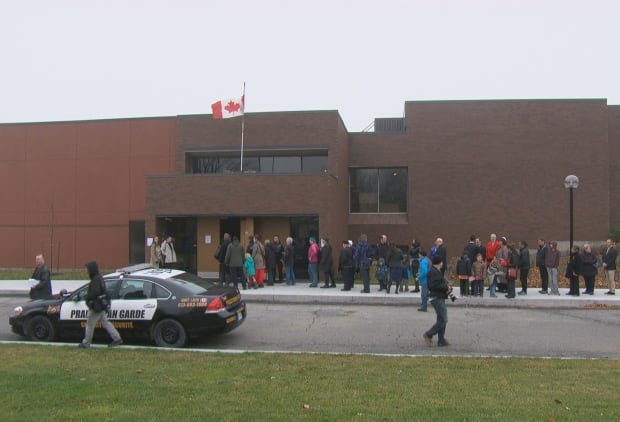 A line stretches back from the door of the Machzikei Hadas synagogue in Ottawa before a multi-faith solidarity gathering on Saturday, Nov. 19. Cameras weren’t allowed inside because it happened on the Jewish Sabbath. (Andrew Foote/CBC)

‘We’re all in this together’

About 600 people came to the synagogue for the multi-faith “solidarity gathering,” organized the day before after someone left racist messages in red paint on a mosque and church — on the heels of three similar acts of vandalism against Jewish people.

“There’s certainly no place in Ontario or in Canada for those acts of hate,” said Ontario Premier Kathleen Wynne, who came to the meeting with local MPPs and former premier Dalton McGuinty.

“It really flies in the face of everything I believe we stand for.”

“We’re all in this together. This is not about the Jewish community or about the United Church or the mosque. When one person, one institution, one community gets attacked we all get attacked,” said Imam Sikander Hashmi of the Kanata Muslim Association after the gathering.

“I think it’s imperative [for]  every single member of society to speak up for what’s right.” 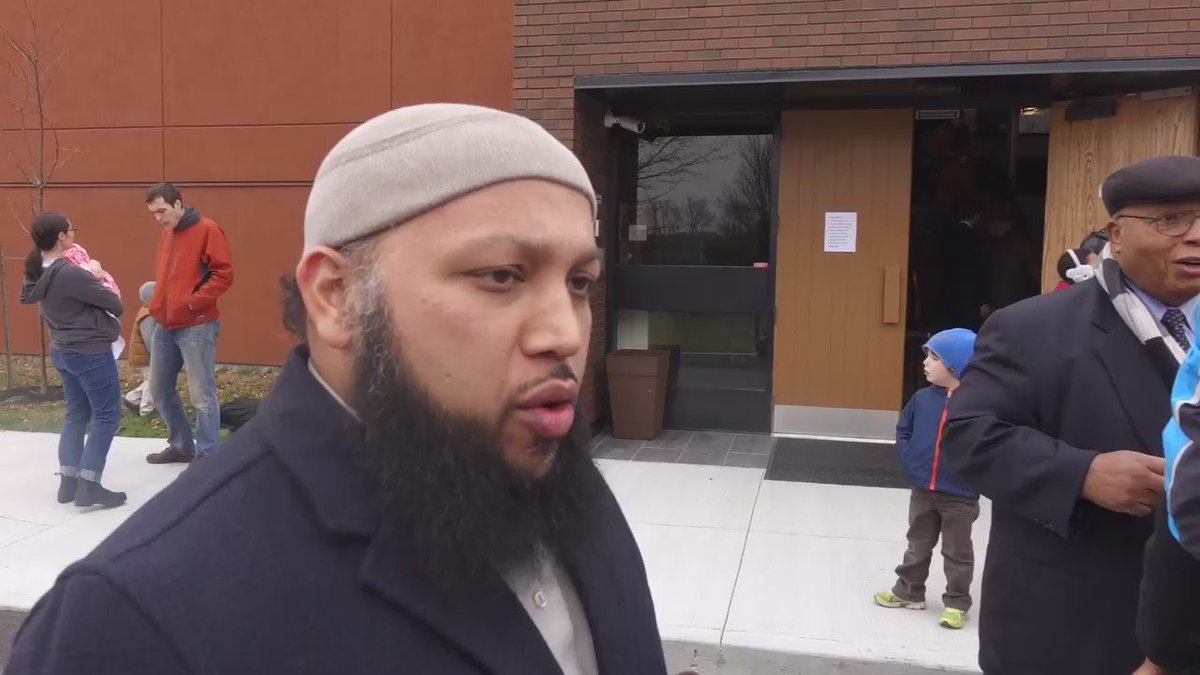 Imam Sikander Hashmi of the Kanata Muslim Association says this week’s vandalism was an attack on everyone.

Rev. Anthony Bailey, a black pastor whose Parkdale United Church has now been targeted with racist graffiti twice this year, said he shared a “daily call to action” with the people inside.

“What I was saying in there was I felt that people need to… speak up when they hear hateful jokes being made, people being treated differently, ostracized and made fun of. If we don’t speak up in these small instances then that kind of behaviour and language becomes normalized — and when it’s normalized, it’s easier for it to gain traction,” he said.

“But I think that if people take a personal responsibility and challenge those types of ways that we disparage each other when they happen — [and] it takes a lot of courage — then we’ll be better.”