A suspect is apparently in custody in connection with the Friday night shooting death of a man in the at the north end of ByWard Market Square at York Street.

Rideau-Vanier Coun. Mathieu Fleury said Saturday police have told him an 18-year-old suspect has been arrested. It’s was not known when the suspect was arrested.

The victim has been identified as Markland Anthony Campbell, also known as Jahiant Jahh, a member of the hip-hop trio HalfSizeGiants.

The other members of the group are Christopher Wiens and William Moreno. They all met in junior high in Ottawa.

Wiens said Campbell, a 42-year-old father, was shot the chest and died in surgery.

He had left work at the Shaw Centre to rush to his daughter’s aid in the ByWard Market, Wiens said.

“He was rushing to defend his 18-year-old daughter’s dignity after she called to say she was being assaulted by a couple of men,” Wiens said.

Wiens recalled how Markland at the age of 16 led an anti-violence concert to protest the March 1994 death of Nicholas Battersby on Elgin Street.

“Now 25 years later and less than a mile away from the 1994 tragedy, Markland was maliciously gunned down defending the principle of righteousness he lived by,” Wiens said.

After a 15-year hiatus, HalfSizeGiants had recently released an album called Life Moves Fast and Wiens said Campbell’s legacy will be immortalized in the song Girl You Know, a song featuring Canadian superstar Danny Fernandes. According to Wiens, HalfSizeGiants just signed a recording contract Friday.

“Although he won’t be here in body to experience his much deserved success after a lifetime of sacrifice and struggle to reach this pinnacle, Jahiant will be smiling down on us all every time the single (Girl You Know) is heard,” Wiens said.

Artist and CHUO radio host Justin “Dynamic” Gunderson said Campbell was a “pioneer in the 613″ for hip-hop and reggae. Campbell deliberately pushed anti-violence messages through his work, Gunderson said.

Fleury, whose ward includes the Market district, said the shooting is especially scary since it happened when so many people were in the market in the mid-evening hours.

“When we see overall in the last nine years the incidents in the market that, be it fights or shootings, the statistics are that it happens (when) bars close,” Fleury said.

“The big stuff happens then.”

Fleury said he wants to know more about why the shooting happened.

“There’s a lot people in the market in that time and we want to make it family-friendly and tourist-friendly,” Fleury said.

The shooting scene was closed off for most of the night and Saturday morning for investigation, including aerial mapping of the scene using police drone aircraft.

The area was reopened shortly after 10 a.m. 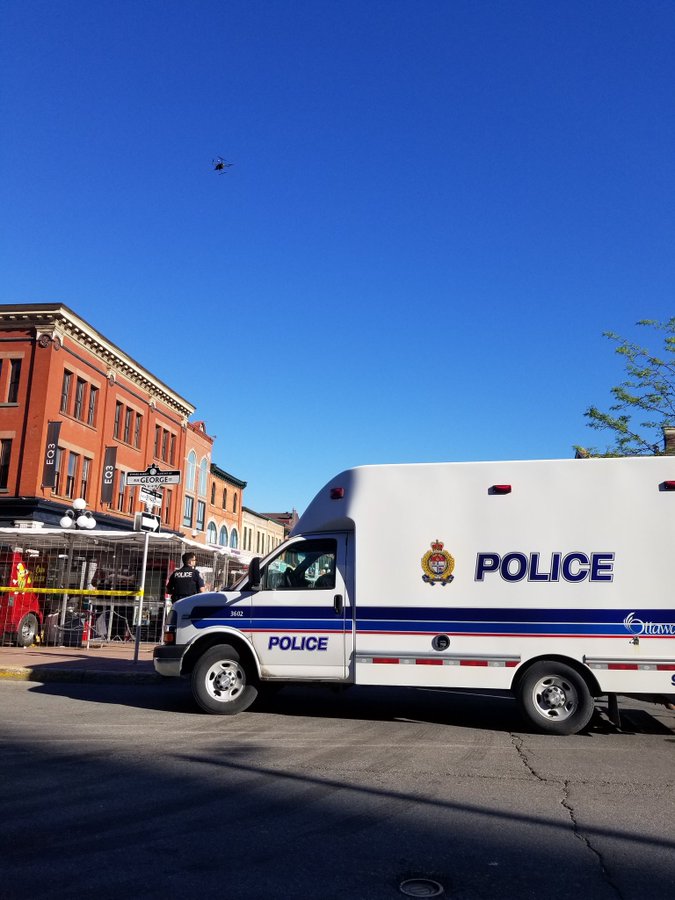 The brazen shooting happened as families and friends packed ByWard Market restaurants to watch Game 4 of the NBA Finals between the Toronto Raptors and Golden State Warriors.

Staff at some restaurants in the area of George Street and ByWard Market Square said patrons on the patios rushed inside when gunfire sounded near the beginning of the basketball game.

Berhe Hagos, a York Street vendor, said people were backed onto the sidewalk outside restaurants near his stand. He saw police cars rushing to the area outside the central ByWard Market building as he was closing up.

Hagos, who’s been selling goods in the market since 1996, scoffed at the suggestion that some people find the market a dangerous place.

Ottawa, he said, “is the safest place.”

Ottawa Markets executive director Jeff Darwin said the organization has done what it can to maintain security under its mandate, which covers the daylight hours.

“We have brought back the children and families to our public markets through programming and public realm improvements,” Darwin said. “Since Jan. 1, 2018 we have invested very heavily in private security, security cameras and security lighting in and around our ByWard Market buildings.”

Postmedia photographer Wayne Cuddington who was nearby said he heard at least two shots around 9:30 p.m. and someone screaming that a person had been shot.

The victim was quickly surrounded by passersby offering assistance. Paramedics arrived a few minutes after and began treatment before loading the victim into an ambulance.