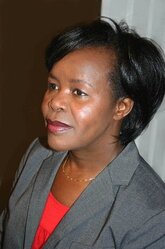 LAYIKI-DEHNE, AliceIn loving memory of Alice Layiki-Dehne, who peacefully died of cancer on March 11, 2017. Proud mother to Ajuki, Ariye and Lugei. Proud wife to Frank. Alice was a devoted PTSD therapist to Iraq and Afghanistan veterans. Her passion for life and relentless positive attitude will be remembered by all who were fortunate enough to have known her.
Ugandan-born Alice was a highly respected community leader and advocate for Ottawa’s many diverse and vulnerable populations including women, and victims of war and civil unrest. She obtained a B.A. in Sociology from Queen’s University in 1992, Bachelor of Social work from Carelton University, Ottawa in 2004, and Master of Social work degree from the same university on 2008. Her career included spells as Community Developer and Social Worker at Centretown Community Health Centre, Nepean Rideau and Osgoode Community Resource Centre, and Somerset West Community Health Centre, before moving on to Health Canada as a Policy Analyst. Alice was the founder of Mosaic Counselling Ottawa, where she provided counselling and psychotherapy to victims of trauma and other psycho-social disorders.
A funeral service for the late Alice Layiki-Deyne was held on Saturday, March 18 at the Christ Risen Lutheran Church, in Kanata,
Tweet Pin It