Halifax is the only major force that accurately reflects its community, Hamilton is close 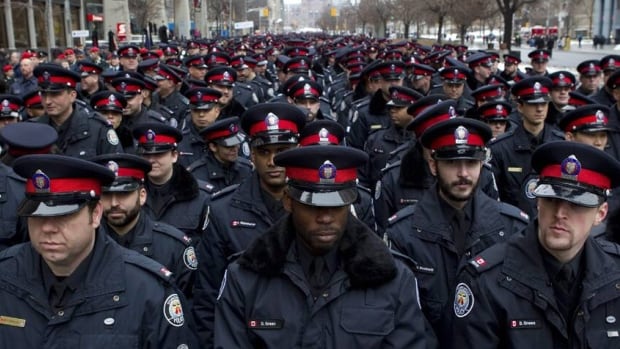 Despite having among the most racially diverse forces in Canada, the Toronto Police Service still lags behind the diversity of its community. (Chris Young/Canadian Press)

Only one major city in Canada — Halifax — staffs a police force that is as racially diverse as its community, CBC News has found.

All other major law enforcement agencies across the country fail to reflect their communities’ diversity among their ranks, leaving large swaths of visible minorities and Indigenous populations without representation.

These findings come as minority groups across North America are shining the spotlight on allegations of abuse of authority and discrimination among polices forces.

In May, CBC News surveyed all major police forces in Canada in order to establish a national snapshot of the racial diversity of key law enforcement agencies.

These figures were then compared to the demographic makeup of the public for each community using the results of the 2011 National Household Survey to calculate the disparity between the racial profiles of police and general populations. 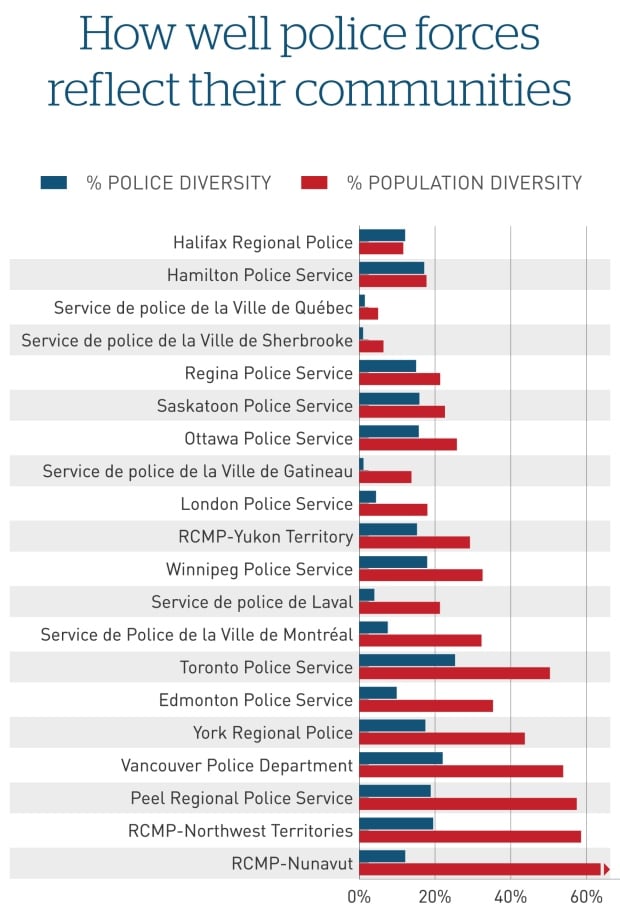 Akwasi Owusu-Bempah at the University of Toronto, who has studied the relationship between race and the justice system in Canada, says certain results from the analysis surprised him.

“I was a little disheartened to see some of the RCMP numbers, for the North for example, very, very small numbers or very low representation of racialized or minority officers policing in the North,” he said.

While he singles out the Toronto Police Service for having made ground on diversifying its force, Owusu-Bempah says there’ is still work to be done. 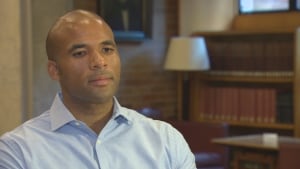 Akwasi Owusu-Bempah , an assistant professor at the University of Toronto, believes the key to improving police-community relations is changing police culture. (CBC)

“About 50 per cent of Toronto’s population is not white, whereas only 25 per cent of the police service is, so we’ve clearly got a ways to go,” he said.

The head of theCanadian Association of Chiefs of Policesays these numbers alone are not reason for concern.

“I’d say we are just on a learning curve right now,” said Clive Weighill, who is also chief of the Saskatoon Police Service, which fared relatively well in the analysis.

“I think we’ve made a lot of progress. If you would compare policing to private corporations or other civic or municipal corporations, I think you’d see our numbers are drastically ahead of most people,” he said.

Black Lives Matter Toronto co-founder Sandy Hudson said that while the findings do not surprise her, she is unsure whether diversity targets will necessarily bring about change. “I don’t know whether or not more racialized faces on the police force is going to change that,” she told CBC News.

“There has to be a real commitment to changing policy, to changing structure, and to changing the institution as a whole, otherwise these issues don’t really get solved,” said Hudson.

Owusu-Bempah adds that the degree to which traditional police culture can assimilate racialized officers should not be underestimated. 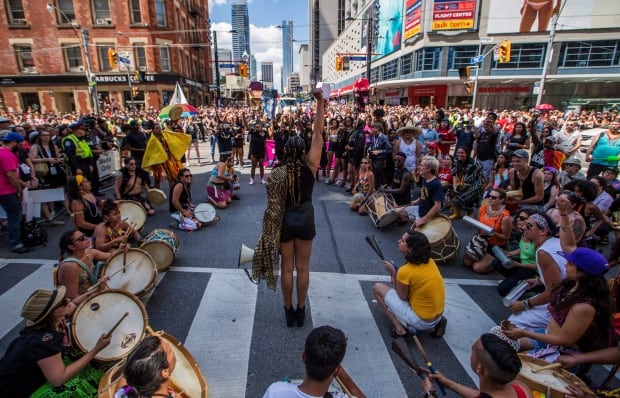 People from Black Lives Matter sit on the ground to halt the annual Pride Parade, in Toronto on July 3. (Mark Blinch/Canadian Press)

Weighill says that, although there are recruiting challenges such as language barriers and historic distrust of police in some communities, “every service that I know of has a recruiting plan to bring diversity into the service because we all recognize how important it is.”

He added that the Saskatoon force has full-time Indigenous recruiter on staff.

The survey results showed that the least racially-diverse police forces were found in Québec. In nearly two thirds of cases across the country, the diversity of communities is more than twice as great as that of their local police force; in Québec, these proportional gaps were among the highest.

While the actual number of officers from minority groups that need to be hired in order to achieve representation that more closely mirrors their population is smaller compared to certain jurisdictions, many Québec police forces are multiple times less diverse than their communities.

Sherbrooke, Québec City and Gatineau all reported having barely over one percent of minority group and Indigenous representation within their ranks, however the diversity of these communities ranged between five and 13 per cent of the total population, creating a relatively large proportional gap in representation.

Similar to the situation in Edmonton and London, the community in Montréal is approximately four times more diverse than its police force.

While the challenges that exist in communities with smaller Indigenous and visible minority populations are sometimes overshadowed by the issues in highly diverse metropolitan areas, Owusu-Bempah warns that the makeup of a community can evolve rapidly, leaving police forces to play catch-up down the road.

The Toronto Police Service says one of the key impediments to achieving better representation is that the rate of officer turnover has been outpaced by the rapidly changing community.

“In 2000 we were at about nine per cent visible minority. We’re now at about 24 per cent,” says Mark Pugash, director of corporate communications for the force.

“People who join tend to stay for 30 years, or in other cases 35 years or longer. So there’s not a great turnover. We’ve also had hiring freezes for a number of years in recent times.”

Pugash says that when Toronto police hire, they have focused on recruiting Somali Canadians, and have also been successful in debunking certain myths about policing through a program that teams up youths with officers.

The CBC News survey found that Halifax Regional Police was the only force to match or surpass the racial diversity of its community, with Hamilton close behind. The Halifax chief says conflicts in the early 1990s led the force to re-evaluate its recruiting methods. 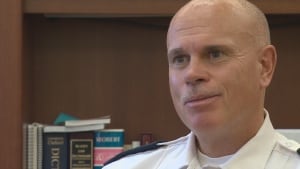 “We started some very targeted recruitment where we wanted to get members of the African Nova-Scotian community here,” said Jean-Michel Blais. “We’re now working very closely with the Muslim community.”

“The most important thing is diversity of thought. We want to be able to encourage the best decision making possible,” he said.

Owusu-Bempah believes the lack of high quality data in the justice systems — as opposed to what is available in the U.S. and the U.K. — limits our understanding of the scope of discrimination. He believes that goal-setting on the basis of diversity metrics such as white versus non-white is simplistic.

“In the absence of data showing that there are disparities or discrimination, no problems exist,” he said.

However, the Canadian Association of Chiefs of Police cautions that gathering race-base statistics can create a climate of mistrust.

The Calgary Police Service was the only agency surveyed that said it did not gather statistics on visible minorities and Indigenous people within its ranks. 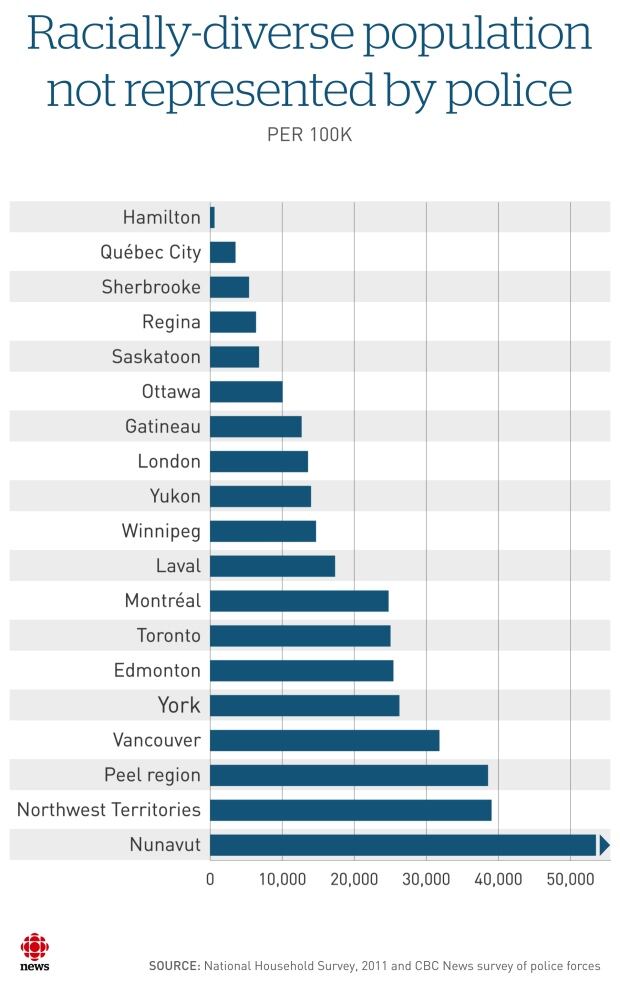