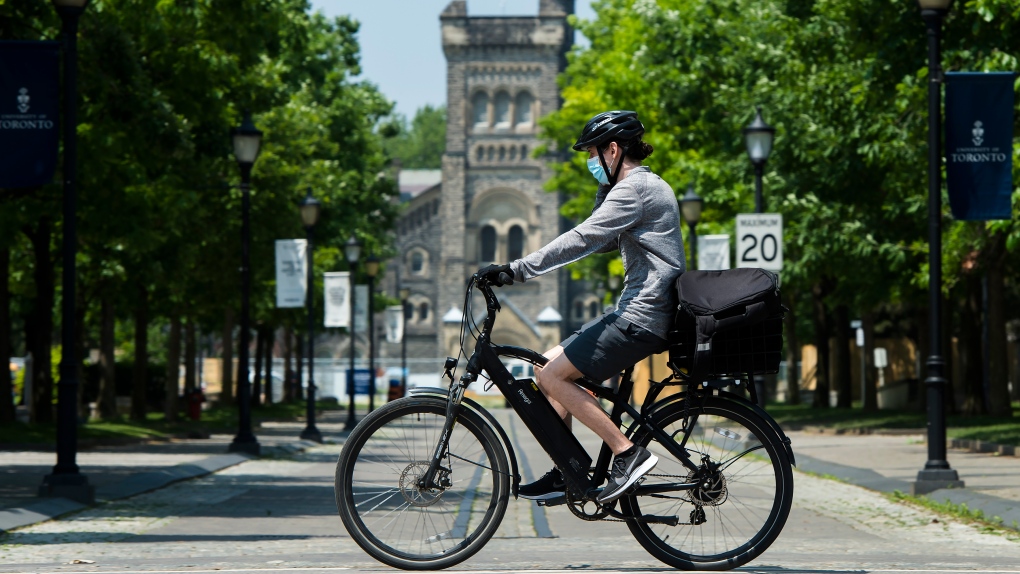 A person bicycles past the University of Toronto campus on Wednesday, June 10, 2020. (THE CANADIAN PRESS/Nathan Denette)

A group of universities and colleges from across Canada are signing a charter to fight anti-Black racism in post-secondary institutions.

The 22-page document requires those signing it to respect certain principles as they develop their own action plans to foster Black inclusion.

Referred to as the Scarborough Charter, the document was drafted by an advisory committee that emerged from an event hosted by the University of Toronto last year as anti-Black racism was in the international spotlight.

“There was an opportune moment for us to say, ‘well, there are a lot of statements being issued, but this may be the time for us to come together and do this together,” charter committee chair Wisdom Tettey said in an interview.

The committee asked universities and colleges for their feedback to refine the charter and met with several organizations and groups, including Universities Canada and the parliamentary Black caucus, said Tettey, vice-president of the University of Toronto.

Forty-six universities and colleges, including the country’s largest post-secondary institutions, are signing the charter virtually on Thursday.

“We expect each partner institution to commit to the principles of black flourishing,” Tettey said.

“The idea of Black flourishing is to make sure that our institutions are places where Black people, faculty, staff, students and community members can feel a sense of belonging, can see themselves in our mission and can be supported to flourish.”

At the University of Toronto, part of the school’s plan to remove barriers faced by Black students includes providing better mental-health support for them, Tettey said.

“We’re making sure that we have counsellors that understand and come from Black communities,” he said.

The university is also reviewing curriculums to ensure Black knowledge is reflected, and is supporting Black students through scholarships and access programs.

Ananya Mukherjee Reed, the provost of the University of British Columbia, said Black students face the same barriers at post-secondary institutions that exist in society at large.

“They go to a class and they feel alone. They’re either the only black student or one of the very few black students,” she said.

“They don’t always feel that they have a voice and when they sometimes express the voice or they would point out something in relation to the Black experience or Black history, they’re not always heard. They often feel dismissed.”

Curriculums in many universities don’t reflect Black experiences or Black successes, she said.

“Black authors are often absent from curriculum and that creates a sense of alienation when you are alone in a classroom, and then you are studying something that you feel is missing a perspective.”

Malinda Smith, the vice-president of the University of Calgary, said there are also few Black scholars in the faculties of Canadian universities.

“There’s a significant underrepresentation. I’m the only Black senior leader at the University of Calgary,” she said, adding that universities need to deal with barriers and biases that may prevent Black scholars from being hired.

“Part of what we have done in the charter, I believe, is acknowledge a set of Eurocentric and colonial processes inside the academy,” he said.

“Here in Nova Scotia, we have a very important historical African Nova Scotian community … that has been in this province for hundreds of years. And these communities need to be engaged as partners in research.”