Diomande Maoua, a health care worker, originally from Ivory Coast who arrived in Canada in 2001, was one of the recipients of the 2016 Welcoming Ottawa award. She was nominated by Muhammad Saqib, a graduate student, originally from Pakistan, who himself had arrived in Canada in 2016. This prestigious award is presented annually, by the Ottawa Local Immigration Partnership (OLIP),  to a small select group of recent immigrants who have made outstanding contributions to their communities.

Diomande started out as Muhammad’s landlady, but quickly became his second mother, giving him advice, making sure he made it to class, and – for the benefit of his future wife – teaching him to sweep, mop and do laundry.

“I came as a refugee myself and the early years were very hard,” says Diomande. “A lot of good people helped me, so whenever I am helping somebody, it’s like giving back what I received.”

“Diomande is a very kind-hearted woman,” says Muhammad. “She knows very well the meaning of the word humanity, without the barriers of any religion, culture and race.”

Muhammad and Diomande are pictured below. 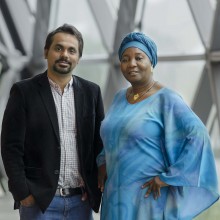